COLERAINE kicked-off their 2018-19 Danske Bank Premiership campaign with notable absentees but get the job done against Warrenpoint Town, but would pay the penalty against Institute…

Graham Crown congratulates Ian Parkhill after the winger got on the scoresheet in the opening day win against Warrenpoint Town.

The opening day of the 2018/19 Danske Bank Premiership campaign looked as if it was going to be tough for Oran Kearney’s Coleraine. A mixture of injuries and suspensions meant the Bannsiders had a total of 10 absentees from the match day squad. This was to have no bearing on the game as goals from Ian Parkhill, Stephen Lowry and Eoin Bradley secured all three points for the Stripes. There was also an eye to the future as Ben Moore started the fixture at right-back, teenager Alexander Gawne was utilised upfront, with Andrew Whiteside and Caolan Brennan also introduced from the substitutes bench.

The Bannsiders knew they would face a tougher test in their first away fixture of the season as they made the trip to North Belfast to face Cliftonville. After a goalless first-half, proceedings exploded into life as Aaron Burns came off the bench to rifle Coleraine in front from Darren McCauley’s cut back. Frustratingly, that lead would be cancelled out five minutes later as Joe Gormley’s well hit free-kick deflected off Stephen Lowry and into the net. However, Coleraine ensured there would be late drama and an unlikely winner arrived on 90 minutes as Lowry’s clever flick found Aaron Burns who curled a delightful effort into the top corner beyond the reach of Richard Brush to make it maximum points from the opening two fixtures.

There would be late drama in matchday three of the Danske Bank Premiership as Coleraine were back in Belfast to lock horns with Glentoran. After a dull opening 40 minutes, the visitors were left celebrating when Brad Lyons headed home from Darren McCauley’s corner-kick. Ronnie McFall’s half-time team talk seemed to spark Glentoran into life as they grabbed an equaliser minutes after the restart. Dylan Davidson’s in swinging free-kick fell to Curtis Allen inside the area and the striker made no mistake with the finish from close range. Incredibly, the game turned on its head as Glentoran took the lead in spectacular fashion as Peter McMahon’s 35-yard effort sailed into the top corner. Like many times during the 2017-18 season, Coleraine ensured they wouldn’t be beaten and this was evident again on 89 minutes. A surging run from Darren McCauley opened up the space which allowed the winger to deliver the ball to the back post where Eoin Bradley was on hand to head home an equaliser.

A North-West derby would end the Stripes’ month as Institute made the trip to The Showgrounds in what proved to be another 2-2 draw for Oran Kearney’s men. The hosts would trail at the break as Dean Curry headed home from Gareth Brown’s corner-kick, but Coleraine completed a strong recovery after the interval to take the lead as Jamie McGonigle and Brad Lyons got on the scoresheet. Unfortunately, the home side couldn’t hold on to all three points as they conceded a late penalty which was coolly dispatched by ‘Stute captain Michael McCrudden. The month would yield eight points from a possible twelve, but there was a feeling it could have been more. 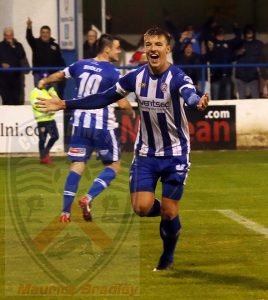 Lyons’ strike looked like sealing all three points against Institute.

The month would draw to a close with BetMcLean League Cup action as Championship side Ballyclare Comrades were visitors to the Ballycastle Road in what would prove to be a nervous affair. The Comrades were the better side in the opening 45 minutes and took a deserved lead when Gary Donnelly fired home from close range, and that advantage should have been doubled but Jamie Willighan and Thomas Robinson both failed to convert from close range. Against the run of play, the Irish Cup holders would find themselves level as Jamie McGonigle’s long range effort deceived Ballyclare ‘keeper Kyle Rowe and into the net. Oran Kearney’s men blew a huge sigh of relief on 68 minutes as Dean Youle was unmarked at the back post and his header was cleared off the line by the alert Josh Carson. As the game looked destined to need extra-time, the home support were sent into raptures late on as McGonigle passed to Ian Parkhill and the substitute found the bottom corner with a delightful effort beyond the reach of Rowe to book their name in the hat for the third round.