The Bannsiders received a timely boost at the start of the month as defender Lyndon Kane marked his comeback for the visit of Ards to The Showgrounds. Coleraine were still hurting from back-to-back defeats to Warrenpoint Town and Newry City, but knew they needed to record maximum points against Ards. On a bitterly cold afternoon, the harder Coleraine tried to find the breakthrough, the more they struggled as Bradley’s terrific cross was blazed wide by Jamie McGonigle with just the ‘keeper to beat. On 26 minutes, McGonigle charged down Johnston’s clearance with the ball landing to Josh Carson but the midfielder could only arrow wide with the goal at his mercy. However, the home side finally hit the front on 53 minutes as a deep corner-kick by McCauley was flicked goalwards by Gareth McConaghie into the path of McGonigle who converted from close range to secure all three points. 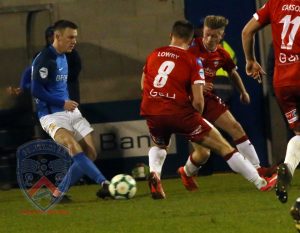 Glenavon put Coleraine to the sword on Friday Night Football as the Bannsiders were heavily beaten.

Rodney McAree would make his first signing as boss by securing the services of midfielder Jamie Glackin prior to Coleraine’s clash against Glenavon on Friday Night Football. It would prove to be a difficult evening for the visitors as they were comprehensively beaten by Gary Hamilton’s side. Andy Mitchell’s first-half double proved decisive, before the classy Mark Sykes added the decisive third after the break as the Lurgan Blues cruised to all three points in front of the BBC cameras. There was even time for substitute Jordan Jenkins to add a late fourth to rub further salt into the Irish Cup holders’ wounds.

Coleraine were looking for an immediate response to that heavy defeat and knew they would face a difficult match as McAree’s former employers Dungannon Swifts were the opponents. In a slow start to proceedings on the Ballycastle Road, it took until the 20th minute for the first opportunity to arrive as McCauley’s cross found the run of Ian Parkhill but the winger’s header failed to hit the target. The breakthrough arrived on 31 minutes as Lyndon Kane’s cross into the box was flicked by Gareth McConaghie into the path of McCauley. As the midfielder set himself up to shoot, he was brought down inside the box by Kris Lowe and McCauley made no mistake as he fired home from the spot. The second goal duly arrived on 50 minutes as McCauley went on a long surging run and his cross was finished by McLaughlin who expertly found the top corner. However, Kris Lindsay’s side would grab a lifeline on 62 minutes as Paul McElroy’s clearance was chased down by the energetic Hughes. The ex-Cliftonville man evaded the challenges of Kane and McConaghie to slide the ball into the corner, but Coleraine held firm to claim a 2-1 win.

Coleraine and Ballymena United shared the goals and the points as both teams served up a Boxing Day classic on Warden Street. The Bannsiders led 2-1 at the break as goals from Stephen Lowry and James McLaughlin had Coleraine’s noses in front, before McLaughlin was dismissed for a second bookable offence on 49 minutes. The 10-men rallied and went further ahead as Ian Parkhill delivered a third as he showed neat footwork to plant the ball into the bottom corner. That two-goal lead barely lasted two minutes as Andrew Burns headed home unmarked to reduce the deficit to 3-2. The visitors’ goal mouth faced a siege of Ballymena attacks as Chris Johns was alert to deny Cathair Friel and Ryan Mayse, but when it looked as if Rodney McAree’s men were to collect all three points, United sub Johnny McMurray rifled home to earn a share of the spoils. 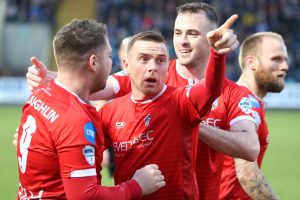 Ian Parkhill celebrates after his strike put the Bannsiders 3-1 ahead in the Boxing Day derby,

Coleraine ended 2018 in fine style as Jamie McGonigle’s late winner helped edge the Bannsiders to all three points against Warrenpoint Town. The visitors would receive a blow four minutes into the game as defender Lyndon Kane was forced to be substituted through a re-occurrence of a foot injury.  His replacement was Graham Crown and the summer signing was called into action almost immediately to make a timely block on Alan O’Sullivan as the striker was played through on goal. On 13 minutes, Bannsiders stopper Chris Johns was called into action to keep out Eamon Scannell’s rasping effort. Coleraine shuffled their pack at the start of the second-half as Eoin Bradley replaced Ian Parkhill but it would be Johns who would once again bail out his team-mates as the ‘keeper kept out O’Sullivan’s shot after he was picked out by Donnelly. Minutes later, Bradley could only fire straight at McCarey after great work by Darren McCauley and there would be further frustration as Lowry failed to hit the target with a long range effort. On 67 minutes, Johns’ inspired display was further evidenced as he somehow managed to tip O’Sullivan’s close range strike around the post for a corner. The visiting support thought they had taken the lead on 70 minutes as a pin-point cross by Aaron Canning found the head of Bradley but his effort went inches over the crossbar. After pushing and pushing for the opening goal, it duly arrived on 76 minutes as McCauley’s cross found the alert McGonigle and he fired home at the second time of asking.