The opening game of the month saw the Bannsiders produce a professional performance to sweep past Dergview at The Showgrounds and set-up a quarter-final clash against Larne. The home side made a quick start and took the lead after three minutes as the energetic Ben Doherty picked the ball up just after halfway line and made a strong run towards goal. The January signing let fly from the edge of the box and his effort found the top corner. On 22 minutes, that lead was doubled as Jamie Glackin slipped the ball into the path of Mark Edgar. The full-back drilled the ball into the box and James McLaughlin profited from close range via the crossbar. The Cup holders’ passage was secured on 70 minutes as a corner-kick found its way to Dean Shiels at the back post and the ex-Northern Ireland international made no mistake from close range to score on his debut. 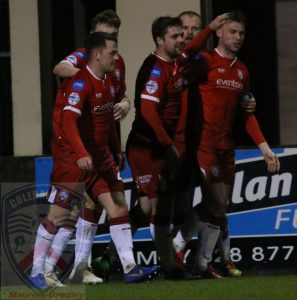 It was back to league duty and first-half goals from James McLaughlin and Stephen Lowry helped Coleraine move up to fourth in the Danske Bank Premiership. It would prove to be a memorable night for Rodney McAree after his Coleraine side registered a 2-0 win over his former club Dungannon Swifts to leapfrog Glenavon into fourth in the Danske Bank Premiership. McGonigle turned provider for Coleraine’s opening goal on thirteen minutes. Some neat footwork allowed him to evade the challenge of a Dungannon player before racing down the right. McGonigle’s expert delivery found the advancing James McLaughlin who stretched to fire the Stripes ahead. Seven minutes later it was two. Jamie Glackin showed some trickery on the edge of the box to open a shooting opportunity. His right footed shot forced Moore to tip the ball behind for a corner. The resulting set piece proved costly for Kris Lindsay’s men as Stephen Lowry produced an excellent turn and shot which found the top corner.

Next up was a trip to Windsor Park as Coleraine made the visit to league title chasing Linfield. The visitors would hold the half-time advantage as tenacious work allowed Jamie Glackin to keep the ball in play from an over hit corner. His pinpoint delivery picked out defender Gareth McConaghie who volleyed home from inside the six yard box. Linfield looked resurgent after the break but their brief spell of pressure came unstuck when Dean Shiels extended Coleraine’s lead on 48 minutes. A well worked move from Jamie McGonigle released Parkhill down the right and his dangerous cross found Shiels who flicked the ball over the line. Linfield pulled a goal back via Josh Robinson on 57 minutes. Coleraine failed to clear Niall Quinn’s free kick and the ball fell kindly for the defender who rattled the ball home from close range. The Blues mounted the pressure and grabbed an equaliser on 68 minutes. Niall Quinn made a strong run from deep, arriving inside the area to dispatch a cut back from Marek Cervenka into the top corner. The drama was still to come as Linfield grabbed the winner on 89 minutes completing a second half fight back for David Healy’s side. Coleraine failed to clear from a corner, the ball fell for Kyle McClean who fired low into the bottom corner to secure the win. 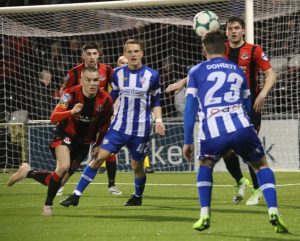 Mistakes proved costly as Coleraine were beaten 4-2 by Crusaders.

A combination of missed chances and poor defending cost Coleraine dear as they slipped to back-to-back defeats in the Danske Bank Premiership against Crusaders. The Bannsiders should have taken a 14th minute lead as a fantastic through ball by Jamie Glackin released the run of McGonigle who was one-on-one with Sean O’Neill, but the Crues stopper made a vital save to keep the scores level.  As Coleraine looked to be going into the interval scoreless, Stephen Baxter’s side took the lead as a corner kick found its way to Colin Coates at the back post and the defender blasted the ball into the net. The second-half was barely seven minutes old when Crusaders doubled their advantage as Cushley’s 25-yard thunderbolt curled into the top corner. Things went from bad to worse on 59 minutes as a wonderful cross from Billy Joe Burns found an unmarked Cushley who added Crusaders’ third. Coleraine responded as McLaughlin fired over the crossbar from the edge of the box, but a lifeline duly arrived on 65 minutes as a fantastic cross on the left-hand side found Dylan King who nodded home his first Coleraine goal since arriving from Glenavon. Bannsiders boss Rodney McAree decided to bring on Dylan Davidson, Cormac Burke and Eoin Bradley in a bid to salvage something from the match and on 79 minutes Coleraine were awarded a penalty as Bradley was sent tumbling in the box by Coates. The ice-cool Jamie McGonigle sent Sean O’Neill the wrong way for his 10th goal of the season. The Bannsiders’ hopes of a grandstand finish were ended on 87 minutes as Crusaders substitute Ronan Hale took advantage of poor defending to fire past Johns as Coleraine were left ruing mistakes in both boxes throughout the 90 minutes.

Coleraine would end the month on a high after beating Glentoran 2-0 in an unusual second-half that saw the Bannsiders being awarded THREE penalties. The first arrived when Dean Shiels’ shot was flicked towards goal by Jamie McGonigle and Calum Birney blatantly palmed the ball away from goal. Referee Keith Kennedy was quick to produce the red card to the central defender but the Bannsiders failed to capitalise as McGonigle fired his penalty over the crossbar. The Stripes were awarded a second penalty on 59 minutes. Aaron Burns made a surging run from midfield before slipping the ball into Jamie Glackin who was wiped out by Dwayne Nelson. Up stepped Dean Shiels and it was a case of déjà vu as the midfielder also blazed high over the crossbar. Coleraine opted for change as Eoin Bradley was introduced up front. Immediately the striker made his mark as he won a third penalty of the match as he was adjudged to have been fouled by Gavin Peers inside the box and he drilled the ball straight down the middle. The three points were secured with two minutes remaining as Ben Doherty fired home his third goal for the club since joining from Derry City. Initially, Dean Shiels made a jinking run inside the box before squaring to James McLaughlin. The striker watched on as his effort was saved by Nelson before Doherty slammed home the follow up. 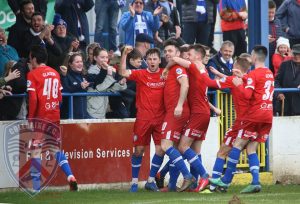