COLERAINE Football Club has announced plans to regenerate the pitch, grandstands and surrounding areas at The Showgrounds…

The club held a redevelopment information evening in the Social Club on Friday evening (November 1), with supporters asked to attend and listen to presentations made by General Manager Stevie McCann and Tim Robinson from GM Design Associates.

The 100-plus crowd also heard from Coleraine Chairman Colin McKendry who insists the facilities must be upgraded so that the ‘club doesn’t fall behind their rivals,’ as well as first-team boss Oran Kearney who used Crusaders as an example of a club which has benefitted from off the pitch improvements in recent years.

The club informed supporters that it is currently spending a five-figure sum in hiring facilities for the Academy right through to the first-team squad.

As previously communicated with supporters, it is the Bannsiders’ ambition to install a 4G surface for the start of next season, with geotechnical works already being carried out to determine the make-up and strength of the pitch and the various strata beneath.

The cost for a synthetic surface will cost in the region of £450,000 to £480,000 for a FIFA standard pitch, and if the 4G surface plans go ahead, the current pitch will be ripped up after the Bannsiders’ last home game of the season.

A host of Danske Bank Premiership clubs have installed a 4G surface, including Crusaders and Cliftonville, who have been extremely successful in recent years.

If the Bannsiders wish to proceed with this plan, then the pitch will need to be ordered in January.

In terms of stadium improvements, the club revealed plans to regenerate the Shed End as 50% of terracing is currently unusable due to subsidence.

The new project would see a 2,000 all-seater grandstand, which would be covered to provide shelter, as well offices being on the top tier, with light engineering units at the bottom.

This new stand would increase capacity for UEFA games, with extra fixtures expected to be a formality when the UEFA Conference League commences in 2021.

The club would like this new stand to be developed and ready to go in three to five years but it could be quicker if money is available through the Department of Culture, Arts and Leisure (DCAL). 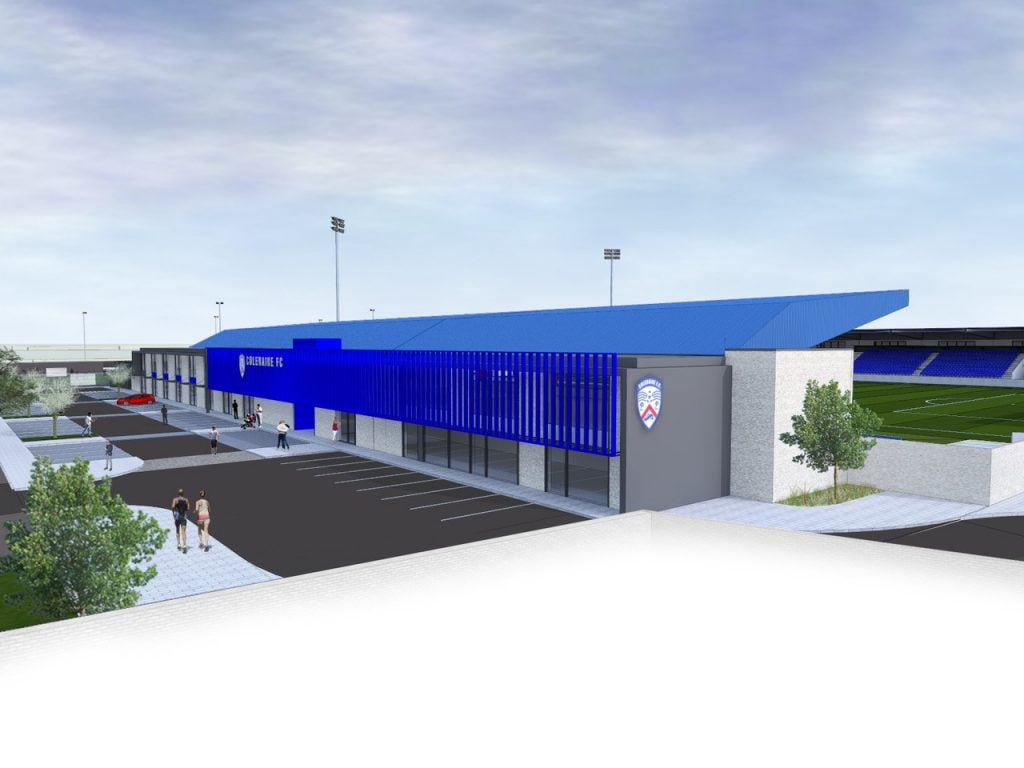 A close-up view of the new clubhouse.

The club explained that the Jack Doherty Grandstand is in a total need of refurbishment and there have been issues with the council over seating in recent months.

Coleraine would like to extend the entire stand and replace the present changing facilities and Social Club as part of their new plan.

As a result of this refurbishment, there would be a minimum of four changing rooms, a new medical room which is a UEFA requirement and a new Social Club/Café that overlooks the pitch.

The club has given a five year timescale to complete this part of the project but revealed that potential money from the DCAL could fast track this phase. 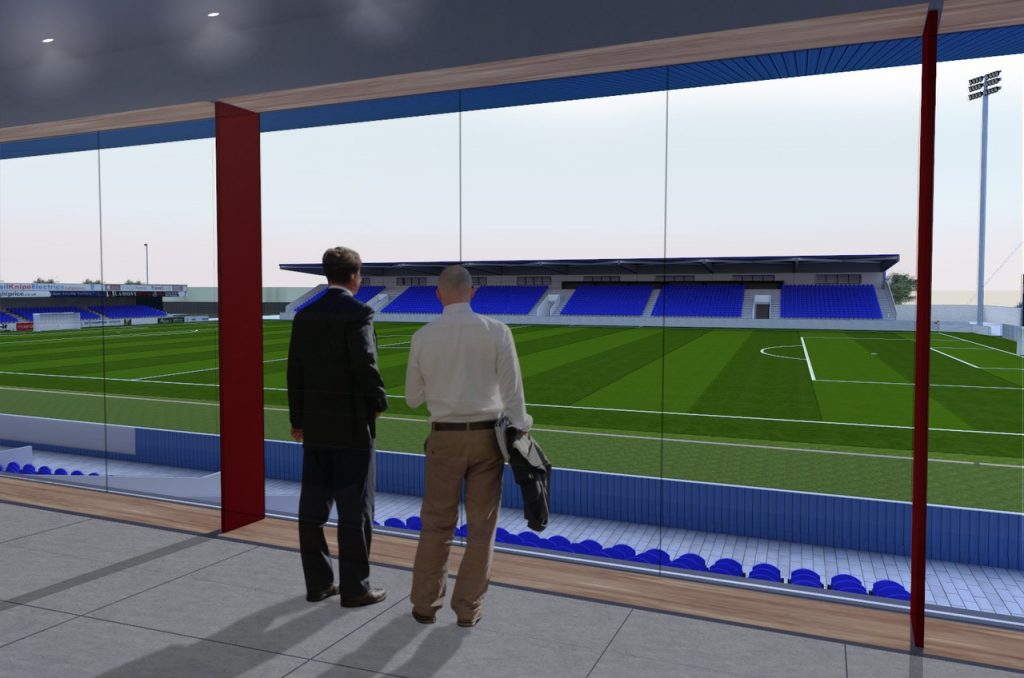 A view from the clubhouse which will be located in the Jack Doherty Grandstand that overlooks the pitch.

The club’s plan for the two stands behind the goal is to introduce safe standing like Glasgow Celtic.

This would ensure that seats can be used for UEFA games and meet UEFA Requirements, as well as increase capacity as these two stands are currently closed when Coleraine compete in Europe.

A timescale of three to five years has been allocated to complete this phase of the project.

As part of a five to seven year plan, Coleraine have plans to replace the current training pitch at the back of the Away End Stand and install three 4G small-sided game pitches, with floodlights, changing facilities, community rooms and a cafe.

As such, this would reduce the costs of hiring facilities elsewhere, as well as a chance to earn income through the rental of the pitches. 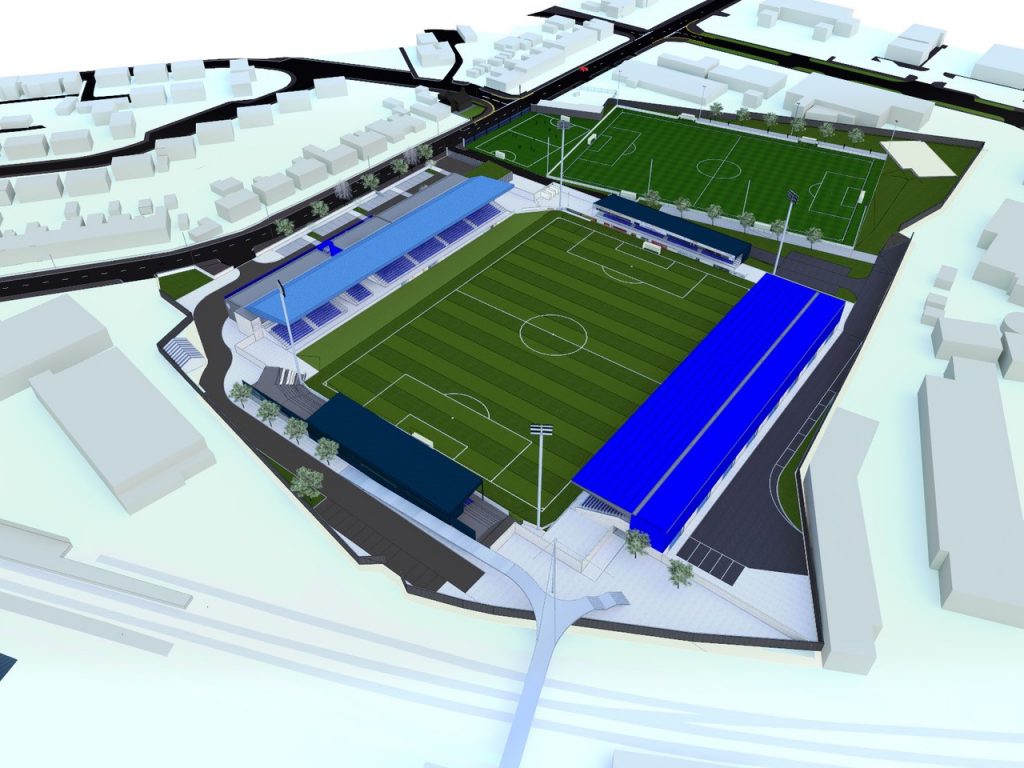 A birds-eye view of The Showgrounds with the stadium improvements and a bridge that links the premises to the town centre. The training pitch can be seen behind the Away End stand.

Stevie McCann told the audience that the local council has been fully supportive of the new plans and there will be ongoing discussions regarding the upgrade of facilities.

The club will appoint a consultant for grant applications to submit to the local Council, Sport NI, Government, and other funders.

A potential link-up with Northern Regional College has been discussed regarding the use of facilities for their sports department, as well as other community and sports groups to use pitches and community rooms.

The club has identified that there is a social need of providing an after school club, which will see children getting their homework done, an exercise class as well as being fed.

Supporters were informed that the Board of Directors are fully aware that there is a need for experts to progress these plans and to appoint proven consultants who have a record of delivering similar schemes.

The club will use the expertise of Tommy Whiteside, who helped to deliver Cliftonville’s, Crusaders’ and Larne’s pitch redevelopment on time and in budget.

Coleraine will speak to planning consultants to ensure that they comply with local and UEFA regulations, as well as finance consultants to access other funding streams. 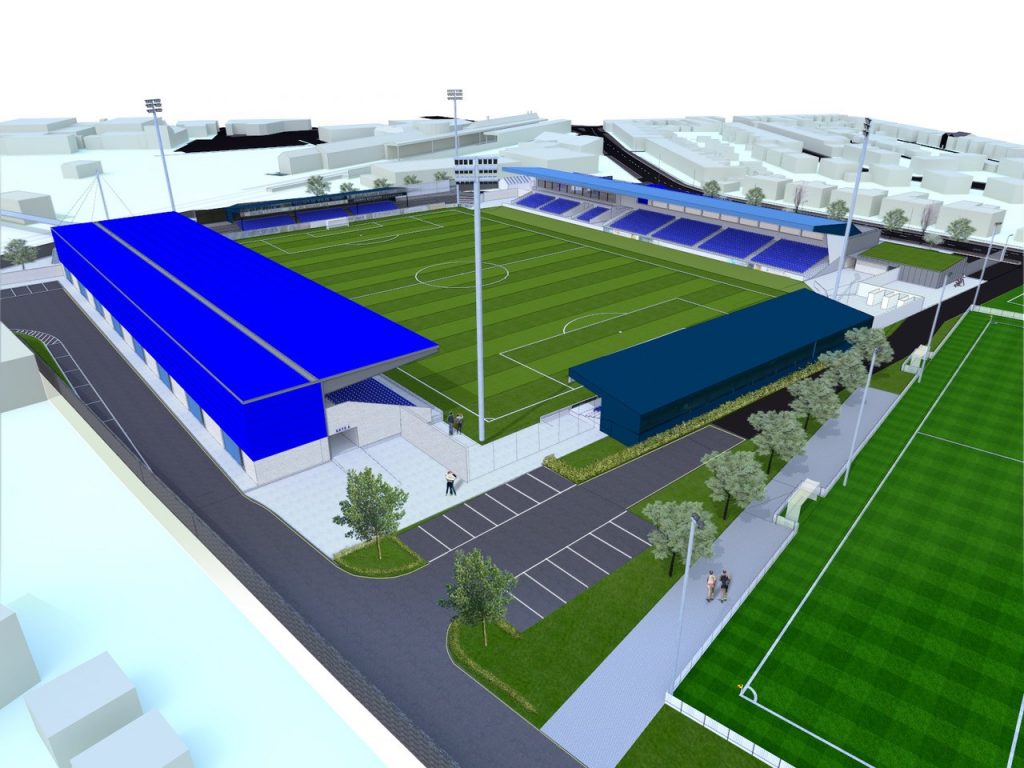 A South East aerial view of The Showgrounds with the Railway End in view to the left and the Jack Doherty Grandstand to the right.

Stevie McCann advised supporters that a separate account will be created for the steering group, which will allow the Board of Directors to concentrate on the day-to-day running of the club.

The club is already preparing a business case for a grant through the Causeway Coast and Glens Borough Council, with up to £250,000 available, which has to be match funded.

Furthermore, the club believes that it can potentially access grants through Sport NI, Alpha Fund, Peace IV funding and a Renewable Fund. It was further stated that £30-40m of DCAL money is in Stormont awaiting ministerial approval.

Tommy Whiteside explained that the use of club bonds was very successful at Crusaders and this can be a potential avenue for Coleraine to raise money. Another example is 1,000 people pay £10 for 10 months which would raise £100,000.

There are also plans for the club to self-fundraise, fans to potentially give donations, as well as local Supporters’ Clubs to be involved. 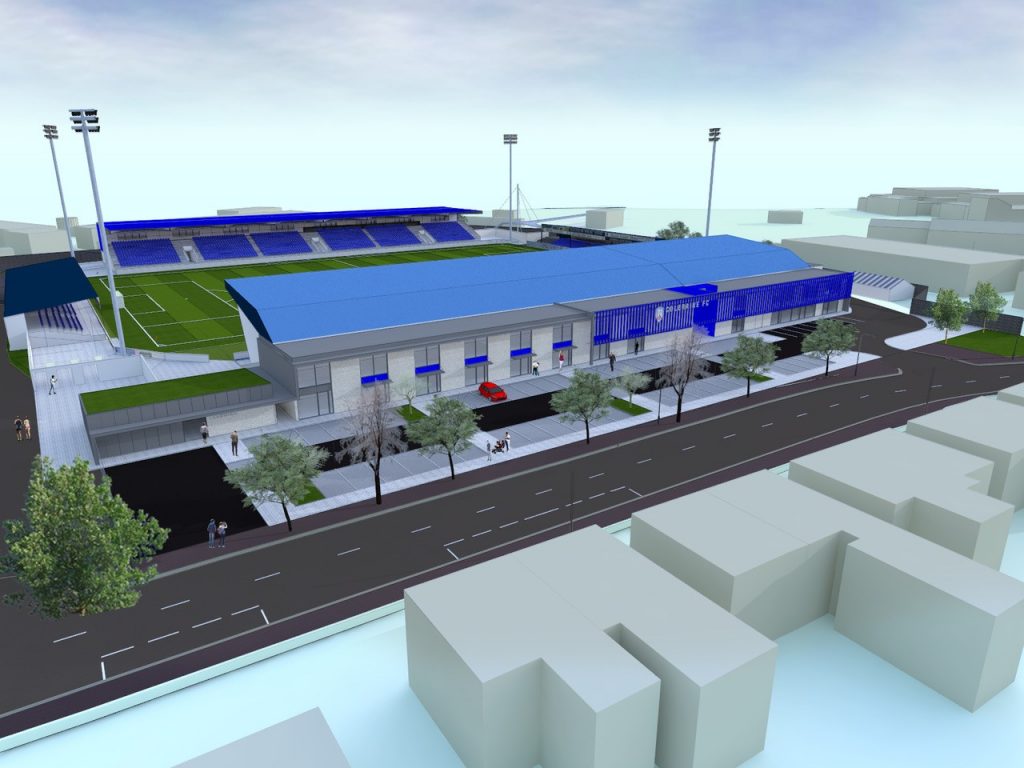 This design shows the front of The Showgrounds from the Ballycastle Road. It was confirmed that the current wall outside the ground would be removed for this part of the project to take place.

The Club will seek feedback from fans and supporters’ groups about the new project, before appointing consultants and implement a funding strategy.

The main point of concern is regarding the 4G pitch, with a £100,000 deposit needing to be raised before an order can be placed in January 2020.

If the money can be raised, the pitch will be and installation will proceed the Monday after the last home game, with the aim of having everything approved for the start of the 2020/21 season.