After Ms Sugden approached the club, the squad signed the charter prior to Saturday’s (November 14) match against Linfield at the Showgrounds. The charter’s signees pledge to “never commit, condone or remain silent about violence against women”. Their shorts will also be embroidered with the campaign’s white ribbon for the rest of the season.

“It’s a great example for all men, but particularly our young men, that violence against women is always wrong and must be stopped and called out wherever it appears,” said the former justice minister.

“Coleraine FC have really stepped up here and I applaud and thank them for their support.

“We must also never forget that men can also be victims of domestic abuse and this should be treated in exactly the same way.”

Women’s Aid’s “16 Days of Action” campaign runs between November 25 (the International Day for the Elimination of Violence Against Women) and December 10 (Human Rights Day).

“I will continue to push in the Assembly for greater laws to protect people from experiencing domestic abuse,” Ms Sugden said. “With Women’s Aid’s support and their highlighting of the issue, we can battle this scourge from all sides.” 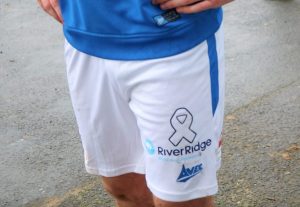 Coleraine FC Chairman Colin McKendry, said: “When I was asked if we as a club would support this campaign I was only too pleased to support it without hesitation.

“Domestic violence has no place in society let alone a home which should be place of safety, security, and comfort. When I suggested to the Board of Directors, Manager and Players about supporting this every single one of them was adamant we as a club had to support this.

“I want to thank Claire for approaching us and asking us to be involved and we will continually promote this campaign and as a club are delighted to be involved as a signatory to it.”

Women’s Aid ABCLN communications manager, Arlene Creighton, said: “With one in four women affected by domestic abuse in their lifetime, staying silent is not an option. We aim to create a society where all women can live in safety, free from violence and abuse.

“The White Ribbon campaign challenges the attitudes and behaviours that lead to male violence against women, and we welcome Coleraine Football Club’s commitment and support to end domestic abuse in all its forms.”