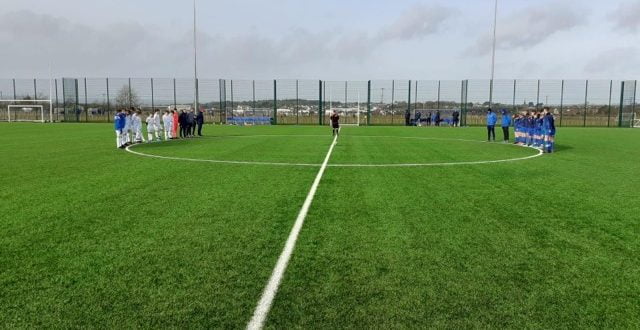 AFTER the disruption caused by storms Ciara and Dennis, all four National League teams resumed action at the weekend…

With the passing of the inspirational Harry Gregg, whose legacy has undoubtedly contributed to the development of these kids, the children were keen to put in performances befitting of the legend. Each team did not disappoint and hopefully Harry will have managed a rye smile from afar.

The Under 12 team travelled to Crumlin, and despite the earlier match on the pitch being abandoned, lined up full of enthusiasm. The kids dominated and were particularly impressive when playing into a strong breeze in the second half. The 2007 team which benefits from the guidance of Harry’s son John raced into a comfortable lead in the first half. Despite conceding a couple of second half goals they continue their current impressive unbeaten run.

The Under 14 team, which have recently welcomed a number of new additions, are now beginning to settle and play with great composure. They won comfortably and scored a number of spectacular goals.

Our under 15’s keen not to be out done by their younger counterparts also put in an impressive display to continue their unbeaten run. This team have been fantastic all year and are blessed with a number of local prospects who will hopefully develop into future first team players.

On behalf of all players, coaches and parents of Coleraine FC Academy we would like to extend our condolences to our head coach John Gregg and his family circle. A number of our teams showed their respects by observing a minute’s silence prior to their games.