WITH the Bannsiders set to welcome Cliftonville to The Showgrounds in front of the Sky Sports cameras on Monday evening, colerainefc.com goes back to the last home televised fixture between the two clubs… 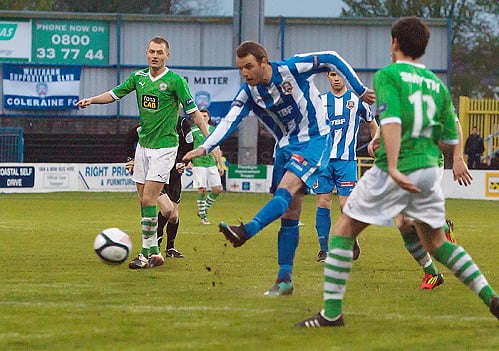 AARON Boyd’s first half goal proved enough to earn Coleraine a Good Friday win over Cliftonville in front of the Sky cameras and keep the Bannsiders’ hopes of European qualification alive.

With Howard Beverland suspended, Coleraine welcomed back Kyle McVey, making his first start in over a year, while Boyd and Ruairi Harkin returned in the only other changes from the last match at Portadown.

It was the visitors who threatened first as a Stephen Garrett effort took a sizable deflection on its way past the far post. Coleraine hit back with Ryan McIlmoyle testing Ryan Brown’s reflexes with a well-struck effort from distance.

Garrett blasted wide of the target again before Coleraine went in front after 23 minutes. After some great football in the build-up Curtis Allen’s shot was parried away, but only as far as David Scullion who looked up and laid the ball off to Boyd who was left with a simple finish.

The goal gave Coleraine a big lift and they really could have extended their lead before the break. Boyd was unfortunate not to double his tally as his effort was cleared off the line by Barry Holland, while David Ogilby headed over and Curtis Allen hit the bar as he got his head to Stephen Lowry’s free kick.

Allen had Coleraine’s two best chances of the opening stages of the second half, first as his free kick bounced awkwardly for Brown, who was forced to scramble it behind at the expense of a corner. Then after good pressure from Boyd had forced Brown into a wayward pass, Allen lashed the ball off target.

The pattern of the game changed when Cliftonville boss Tommy Breslin made a triple substitution, introducing two more forwards in Liam Boyce and Joe Gormley and creative midfielder George McMullan. Cliftonville began to put more pressure on the Coleraine defence, but Boyce wasted a good chance not long after his introduction by firing over from yards out.

Holland and Garrett missed presentable opportunities as for all their increased possession, Cliftonville were not overly troubling Michael Doherty in the Coleraine goal. Coleraine sub Shane Jennings shot over the bar as Coleraine looked to make the game safe, but were given a late scare when Garrett missed the target when left unmarked.

The victory extends Coleraine’s unbeaten run against Cliftonville to 14 matches and cuts the gap between the two sides to just four points, keeping Coleraine’s hopes of finishing in a Europa League qualifying spot very much alive.