The 28-year-old put pen-to-paper on a new contract earlier this afternoon that extends his stay at The Showgrounds until the end of the 2022-23 season.

Canning, who has made the most appearances in the current first-team squad, admits he is hungry for more success after lifting the BetMcLean League Cup back in February.

“I am over the moon to sign a new contract with the club,” he said.

“It is great to finally get everything done and know what’s happening.

“I am hungry to win more trophies and Oran is the manager I want to play under.

“I feel like I’m in the prime of my career at 28-years-old and I know this deal will last until I’m 31, but sure Steven Douglas is still playing!

“A lot of people have said that this is my most consistent year in terms of playing well, and whilst I’d agree with that, the key thing for me is that I’m enjoying it and that makes playing so much easier.”

With the Bannsiders in contention in both the Danske Bank Premiership and Irish Cup prior to the COVID-19 outbreak, Canning is under no illusions that the Stripes are able to compete for major honours moving forward.

“We are sitting pretty in the league and into the semi-final of the Irish Cup, but health and safety has to come first,” he added.

“We just don’t know when the season will resume, if at all, so it’s all about being smart and keep ticking over.

“The question I always ask is ‘why wouldn’t you want to play for Coleraine’?

“Coleraine is a big club and we are challenging for trophies, so I’m sure there are a lot of players who would love to play here.

“I would just like to thank the fans for their continued support and I look forward to seeing you at The Showgrounds sometime soon.” 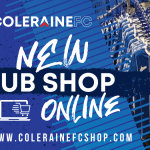