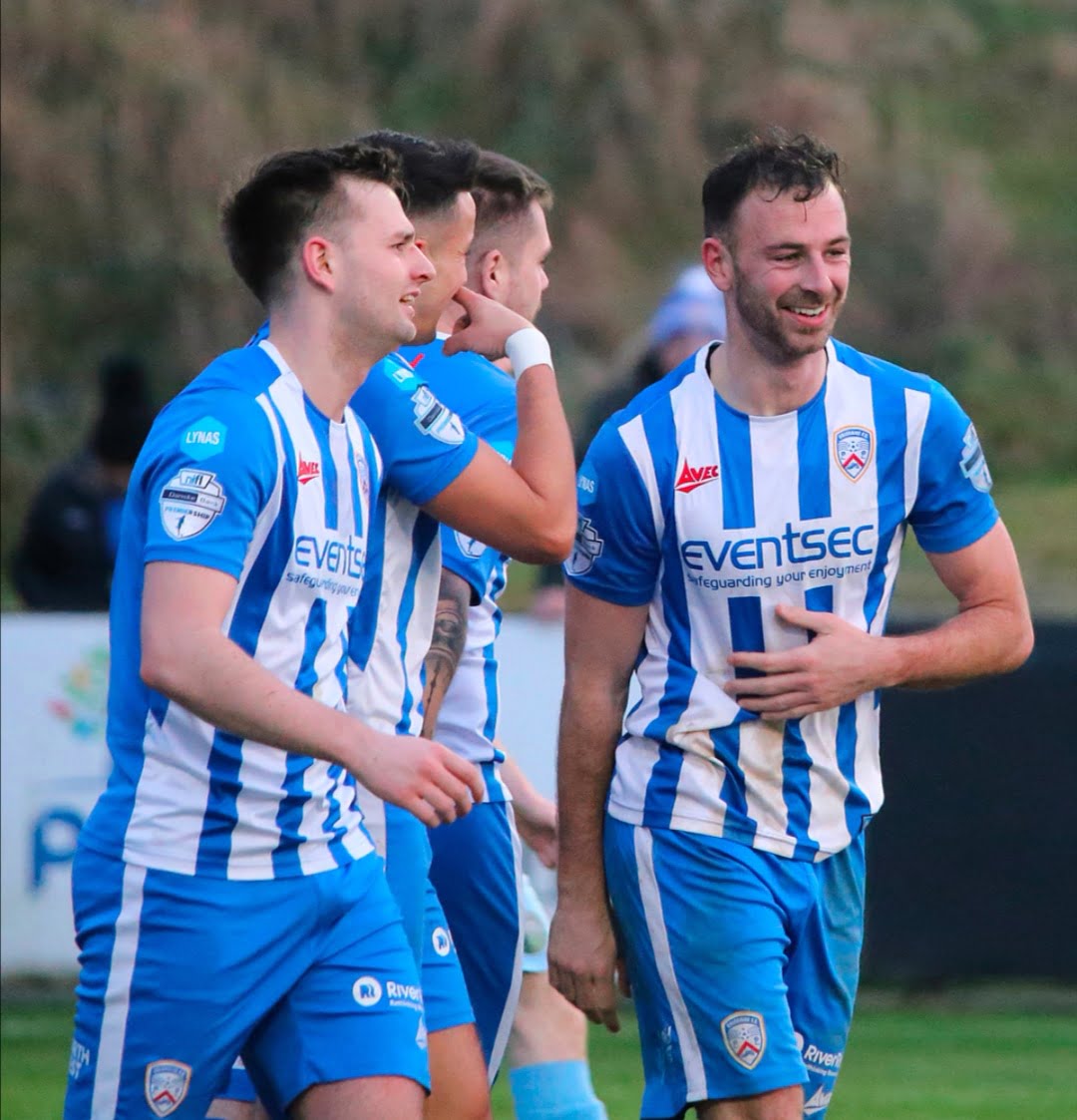 JAMIE Glackin would go home with the match ball as Coleraine recorded a comfortable victory against Warrenpoint Town at Milltown.

Bannsiders boss Oran Kearney made two changes to his starting line-up as Adam Mullan made a return from injury to replace the suspended Lyndon Kane, with Matthew Fitzpatrick handed his first start following his January switch from Belfast Celtic.

The visitors – who were ruing a defeat against Crusaders last weekend – made a bright start and threatened after three minutes as Ben Doherty’s corner kick was headed over the bar by Gareth McConaghie, before ‘Point defender Danny Wallace made a superb tackle to prevent Eoin Bradley from scoring a certain goal.

On 14 minutes, a cross from Bradley would find Fitzpatrick at the back post but his effort deflected off Colm Deasy and into the hands of Warrenpoint stopper Mark Byrne. A few minutes later, the Stripes would rattle the post as Doherty’s free-kick ricocheted off a ‘Point defender as the hosts cleared the danger.

Warrenpoint – who emerged victorious the last time the two sides met – had a sight on goal on 26 minutes as Ryan Swan showed neat footwork at the edge of the box but his lobbed effort failed to trouble Chris Johns.

Barry Gray’s men should have taken the lead on 35 minutes as a strong run from Brandon Doyle opened up the Coleraine defence and the attacker squared the ball to Alan O’Sullivan. Just when it looked like the striker would open the deadlock, he was thwarted by a superb close range save from Johns.

That save would prove pivotal two minutes later as Coleraine took the lead. A fantastic through ball by Josh Carson released the run of Glackin and the silky midfielder had the vision to lob Byrne and find the bottom corner. That lead was almost doubled before the break as Byrne was called into action to deny Aaron Traynor’s header on the goal line.

The Bannsiders started the second-half on the front foot and had two chances within the first minute of the restart as Bradley and Fitzpatrick were both denied by Byrne. On 59 minutes, the stopper showed his credentials yet again as he somehow denied Carson from close range.

However, the second goal duly arrived on 67 minutes as Glackin let fly with a 25-yard half volley that fizzed into the top corner. At the other end, ‘Point searched for a lifeline and it almost arrived as O’Sullivan dragged an effort inches wide of the far post.

Glackin ensured that he would go home with the match ball on 74 minutes as Fitzpatrick allowed the ball to roll into the path of the ex-Crusaders ace. The 24-year-old sprinted at goal and calmly slotted past Byrne for his first hat-trick in senior football.

Not content with that, the Bannsiders would add a fourth two minutes later as James McLaughlin’s knock down found Fitzpatrick inside the area and he prodded past Byrne for his first goal in Coleraine colours. There were further chances for Doherty and Fitzpatrick but they couldn’t find a way past Byrne, with ‘Point ending the match with 10 men as Deasy was dismissed for a foul on Traynor.