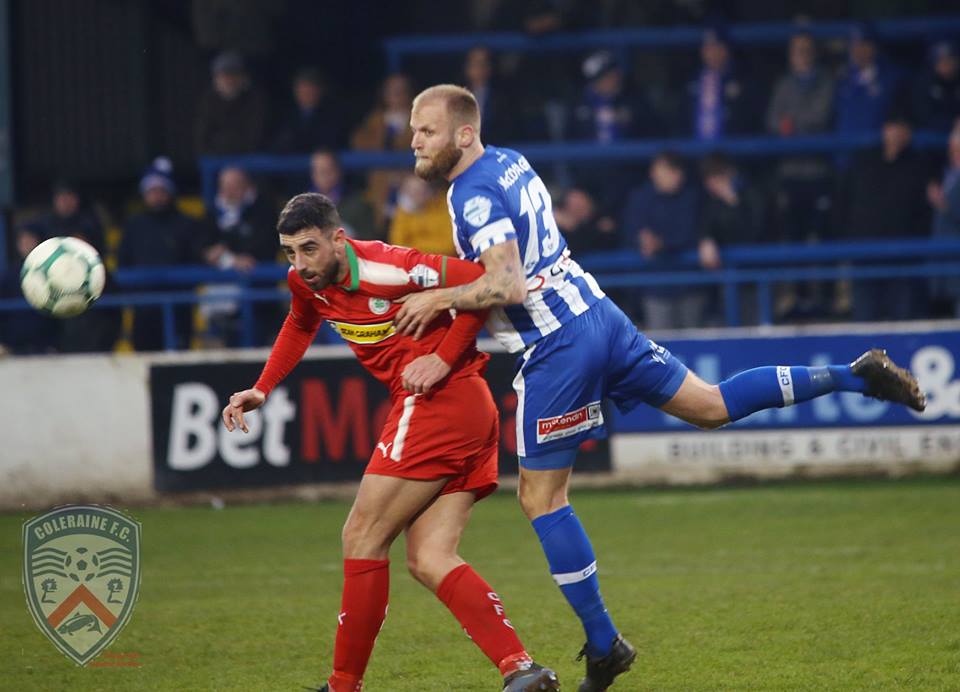 Coleraine move up to fifth in the Danske Bank Premiership after their convincing win against Cliftonville on New Year’s Day. Goals from Eoin Bradley, Stephen Lowry, James McLaughlin and Aaron Canning helped the Bannsiders to all three points.

The visitors had the first chance of the match inside the opening two minutes as Joe Gormley fired over. Eoin Bradley could have given the home side the lead on seven minutes as he beat the offside trap and raced through on goal. The striker seemed to get the ball trapped under his feet inside the box and failed to get any power behind his attempt at goal.

Coleraine should have gone in front on 12 minutes. Jamie McGonigle chased Ciaron Harkin’s long ball into the corner before cutting in side and firing towards goal forcing an excellent save from Richard Brush.

The Bannsiders grabbed the lead on 20 minutes as Eoin Bradley fired home from close range. A great cross field pass from Adam Mullan found Jamie McGonigle in acres of space and he squared the ball across the box for Bradley to tap home. Moments later the home side doubled their lead as Ciaron Harkin put Stephen Lowry through on goal and the midfielder kept his composure to slot home.

Rodney McAree’s men could have gone further ahead as Josh Carson had a well placed shot tipped over by Brush. Cliftonville looked to pull a goal back before the half time whistle as Rory Donnelly and Ryan Curran went close but to no avail. Coleraine looked comfortable at the break as Cliftonville struggled in stages of the first half.

Barry Gray’s side looked the more energetic of the sides in the early stages of the second half and could have reduced the deficit. Ryan Curran’s cross looked to find Rory Donnelly at the back post only to be denied by a great clearance from Graham Crown.

Coleraine could have wrapped the game up on the hour mark as Darren McCauley looked to have reaped more sorrow on the Reds as he raced through on goal but his strike trickled wide of the post. Cliftonville responded on 65 minutes as Joe Gormley was afforded time and space on the edge of the box but he fired his effort wide of the target.

The visitors did reduce the deficit on 69 minutes as Liam Bagnall found the bottom corner. A great run from Joe Gormley allowed the forward to tee up Bagnall who made no mistake with the finish.

Jamie McGonigle almost restored the Bannsiders two goal lead on 74 minutes. The striker climbed well at the back post to meet Aaron Canning’s cross but the effort was denied by an expert save.

Coleraine’s third goal arrived via an unlikely source as Aaron Canning fired the ball high into the top corner. Cliftonville failed to clear their lines and were punished as the Coleraine full back thumped the ball home.

The Bannsiders made it four on 88 minutes. James McLaughlin who was fresh off the bench as he went through on goal, rounded Richard Brush and slotted home in his first action of the game.

A positive showing from the Bannsiders over the Festive period sees them four games unbeaten ahead of this weekend’s clash against H&W Welders in the Irish Cup.