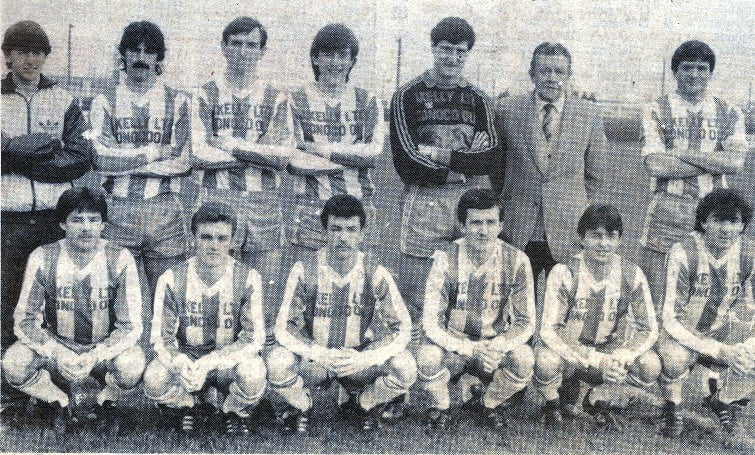 Coleraine go into 1985 proudly atop the Irish League, and Saturday’s 3-1 dismissal of Carrick Rangers at the Showgrounds at last laid to rest what was threatening to become a home bogey.

And though it took a fortuitous own goal from Carrick’s Smyth to set the Bannsiders on the road to victory, there were signs aplenty of a side full of class and ability, and Jim Platt has brought to it an organisation and discipline that will serve them well in the Championship run-in.

Before the match Coleraine chairman Jack Doherty announced a three-season link-up with oil suppliers Kelly’s, and said that the deal would ease some of the financial problems besetting the Showgrounds Club, and the team certainly started as if they were going to celebrate with a performance full of energy and fire.

The home side started confidently, with Henry and Healy looking particularly menacing; but promising situations were spoiled by over- elaboration and poor finishing, though McGurnaghan went close after 10 minutes, and a Wade effort, only partially struck, just shaved an upright.

Carrick relied heavily on an offside trap, which was being efficiently defied by the well- timed runs of McCoy and Henry up front, and from Ward, Tabb and McCreadie from defence.

But, despite all the attractive one-touch play, chances went extravagantly amiss, and the hoodoo that had blighted Coleraine’s form at home seemed to have struck once more.

Rangers threatened only fleetingly on the break, with McKiernan and Fellowes prominent, but there was no panic in the home defence. Wave after wave of Coleraine pressure continued, and it was finally rewarded, in bizarre fashion, after 32 minutes. Healy slipped past three defenders on the left, for once delivered a timely cross, and in an effort to clear, centre-back Smyth could only head past a helpless Ricky Adair.

Ten minutes later Carrick were celebrating an “equaliser” from McKiernon, but the effort was ruled offside, and Coleraine quickly replied with a counter attack, led by McCoy, but McDowell’s firmly-struck shot slid past the left side of the goal. After the break the home team continued to press, and when McDowell’s header, from McCoy’s corner, was cleared on the line by Gorman, McGurnaghan’s stinging drive was superbly grabbed by Adair.

In the 68th minute Coleraine scored their second when McCoy ran on to McCreadie’s telling pass, beat two Rangers’ defenders before planting the ball beyond Adair.

Four minutes later the points were assured when Healy was upended by McCullough in the Carrick penalty area, and the Irish international midfielder himself fired high and hard into the net from the “spot.”

Coleraine ‘looked more relaxed for the remainder of the game, but they also lost some concentration, and that allowed Richardson to capitalise on Tabb’s error to give Carrick some consolation for an afternoon of rearguard action, briefly relieved by attacks down the flanks but too often fizzling out in indecisive passing and finishing.

With Portadown dropping a point at The Oval, three clubs-Ballymena, Portadown and Coleraine-are level on points at the top of the most keenly contested Irish League race for years, with Coleraine in front on better goal difference.

The Bannsiders now look set to make a real bid for the title, and New Year success surely must tempt back those missing fans.