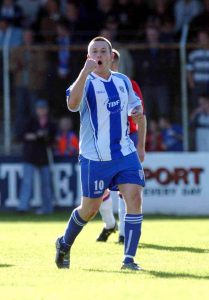 After crashing to their first league defeat of the season against Linfield, it was the response Bannsiders boss Marty Quinn had been looking for.

But they had to recover from an early setback as Rodney McAree headed the Swifts ahead on 12 minutes.

Goals from Jody Tolan and Stephen Carson put Coleraine in front before the Swifts’ Scott Walker made it 2-2.

McAree’s opener was a neat header past keeper Davy O’Hare after creeping in to meet J P Gallagher’s cross.

O’Hare then pulled off a fine one-handed save to stop McAree putting Dungannon two up.

Coleraine drew level on 33 minutes when Carson’s ball in was flicked on by Armstrong for Tolan to round keeper Stuart Addis and hold off the challenge of defender Kieran Rafferty to score.

Carson made it 2-1 for Coleraine on 51 minutes when his free-kick went straight into the Dungannon net but the Swifts equalised through Walker’s close-range 80th minute goal.

Armstrong restored Coleraine’s lead from a Carson cut back and then back headed the fourth to make sure of the points.