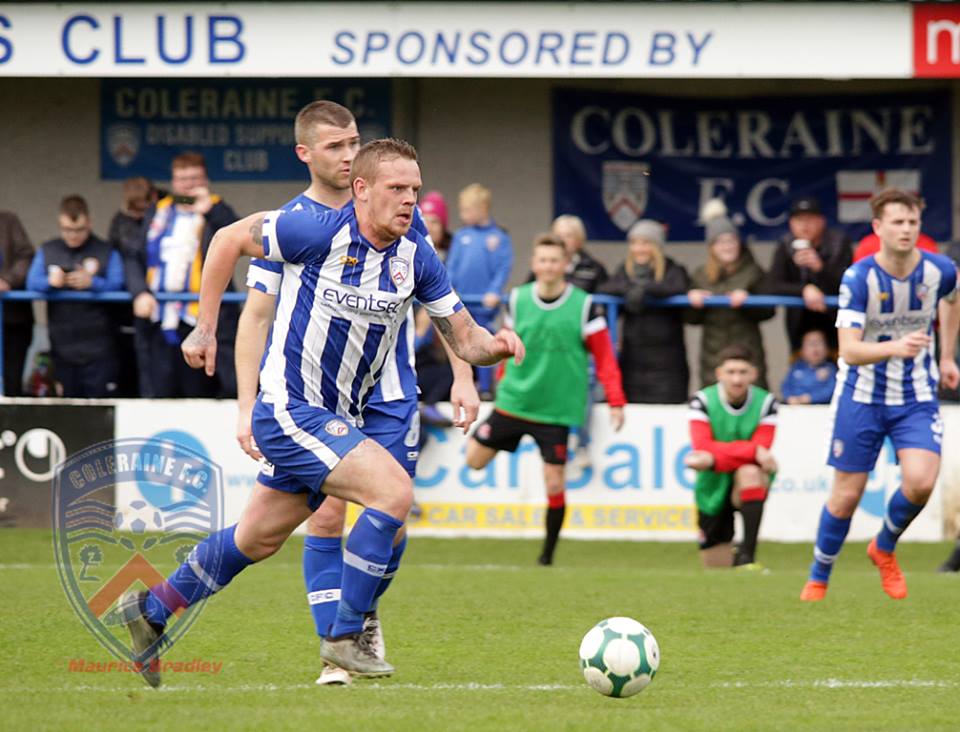 The Bannsiders were made to work for the victory and suffered two injury setbacks as strikers James McLaughlin and Aaron Burns had to be withdrawn from proceedings.

However as the game entered the final 20 minutes, defender McConaghie stepped up and curled a free-kick into the corner to register the Stripes’ first win since beating the same opponents last month.

The home side made a bright start and threatened after six minutes as McLaughlin held the ball up for the onrushing Ciaron Harkin. As the midfielder attempted to shoot he was put under pressure by Mark McChrystal and couldn’t keep his effort on target.

There was a scare for the home support two minutes later as a long ball wasn’t cleared by the Coleraine defence, with Paul Heatley’s header going inches over the crossbar. In a first-half that lacked any real cut chances it took until the 25th minute for the next one to arrive as neat build-up play by the visitors resulted in Rory Patterson’s shot forcing Chris Johns into a smart save.

Stephen Baxter’s side had the ball in the net on 40 minutes as a long throw by Sean Ward was chested down by Jamie Glackin into the path of Heatley. The attacker’s effort was deflected off the crossbar by Stephen Lowry with Kyle Owens on hand to fire home the rebound. Thankfully for the Bannsiders, the big defender was in an offside position.

The second-half was similar to the first as both sides struggled to get a foot on the ball and create chances. The introduction of Alexander Gawne brought some added impetus and spark to the Bannsiders attack and they threatened when Jamie McGonigle curled an effort wide.

The goal arrived on 73 minutes as Coleraine were awarded a free-kick 25 yards from goal. Up-stepped McConaghie who picked out the bottom corner with his first goal of the season. That lead was nearly doubled as Stephen O’Donnell headed wide from a corner, before McGonigle had a goal bound effort blocked.

The visitors pushed for a late equaliser and nearly came up with the goods in additional time as a long ball forward landed at the feet of David Cushley. The former Ballymena United man hit a strong effort on goal but Johns was there to deny the midfielder. There would be one late chance as Rodney Brown headed over from a corner.