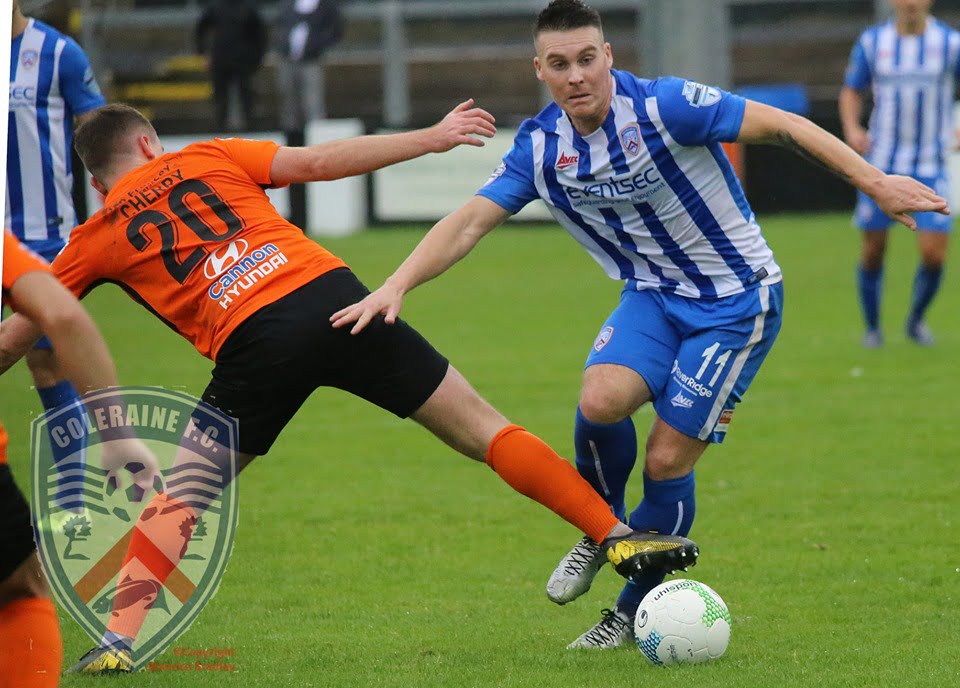 In damp conditions at the Loughshore Hotel Arena, the home side started the brighter as midfielder Kyle Cherry forced Chris Johns into action early on with a rasping effort from the edge of the penalty area.

The Bannsiders responded at the other end as Eoin Bradley pinched the ball from the clutches of Aaron Hogg before teeing up his strike partner Nedas Maciulaitis but his effort was cleared from danger.

Despite, the home side’s early pressure, the visitors grabbed the advantage via Eoin Bradley in the twelfth minute. Caolan Loughran failed to deal with Ben Doherty’s in swinging corner and the ball broke kindly for Bradley who poked home from close range.

The Bannsiders had Lyndon Kane to think shortly after as the full back, who captained the side for the first time, made a vital interception to prevent what looked like a certain shot at goal from a Carrick attack.

Carrick were awarded a penalty midway through the first half as Gareth McConaghie fouled Stewart Nixon inside the area. Central defender Caolan Loughran was given the task of taking the spot kick and the former Ballymena United defender made no mistake with the finish, firing low into the bottom corner.

Niall Currie’s men looked to have grabbed the lead on 34 minutes as Guillaume Keke showed great tenacity to evade the challenge of Gareth McConaghie before crossing for the advancing Lee Chapman, who had made a great run from deep. Chapman climbed whilst unmarked inside the area but his effort drifted wide.

Lyndon Kane set Coleraine on the attack shortly after and was presented a great opportunity to find the net but to no avail. Initially, Kane surged from deep before laying the ball into the path of Maciulaitis. The striker fired straight into the midriff of Aaron Hogg but the ball broke kindly to Kane, who had continued his run but he poked wide.

Coleraine regained the lead before the interval via an own goal. Initially, Stephen Lowry’s free- kick into the box caused problems for the Carrick defence. The ball fell to Maciulaitis inside the area and his strike towards goal was turned into the back of by Caolan Loughran, which meant he grabbed a goal at either end in the first-half.

Carrick threatened after the restart as Stewart Nixon threatened from the edge of the area but Chris Johns proved equal to the effort.

Coleraine bagged a third goal after the hour mark via Aaron Jarvis. Ben Doherty’s corner caused problems for Carrick goalkeeper Aaron Hogg allowing Jarvis to pounce at the back post to grab his second goal of the season.

The Bannsiders put the game to bed on 68 minutes via Aaron Traynor, who opened his account for the season. Eoin Bradley made a super run down the left before pulling the ball back to Ben Doherty who shot at goal from the edge of the box. Carrick ‘keeper Aaron Hogg spilled the initial effort leaving Traynor with an easy finish from two yards to grab his first goal for the Bannsiders.

Oran Kearney’s men almost grabbed a fifth in the closing minutes as Maculaitis tested Aaron Hogg but the goalkeeper produced a routine save to deny the goal.