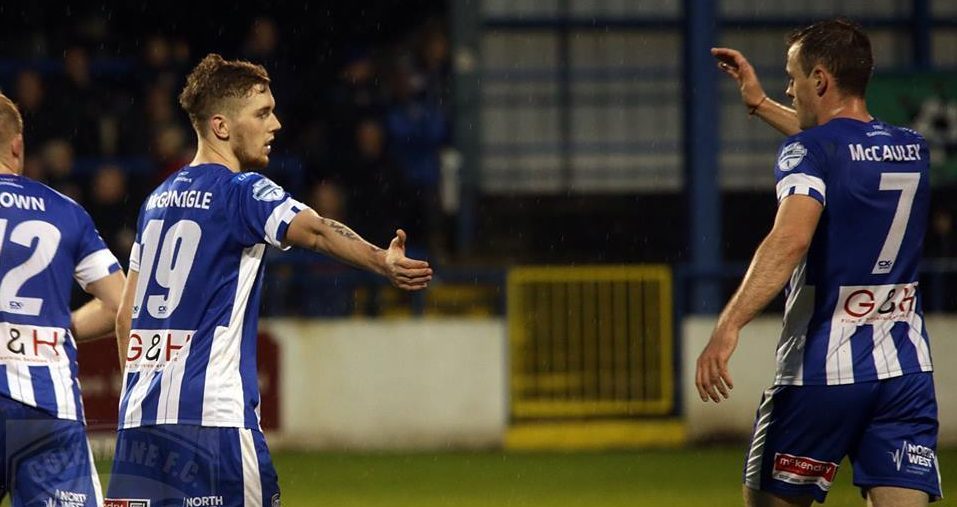 The Bannsiders fell behind in the first-half as Gary Donnelly profited for the visitors from close range, but dragged themselves level when Jamie McGonigle’s effort proved too hot to handle for Ballyclare ‘keeper Kyle Rowe.

The second-half was a cagey affair with Ballyclare having a header cleared off the line, with the home side also striking the post. However there would be late drama when Parkhill was introduced from the bench with devastating affect as he curled his effort into the bottom corner.

The Bluefin Sport Championship side made a strong start to proceedings and threatened after seven minutes when Gary Donnelly turned at the edge of the area and dragged his effort narrowly wide of the post.

On 17 minutes, the Comrades nearly took the lead in bizarre circumstances as Graham Crown’s sliced clearance went inches over the cross. From the resulting corner, the visitors made the breakthrough as Donnelly profited from close range after his initial header was palmed away by Chris Johns.

Stephen Hughes’ side were sensing a cup upset and nearly added a second as Johns was alert to deny Jamie Willighan, before Bannsiders defender Gareth McConaghie made a timely block to prevent Thomas Robinson from getting a shot on goal.

Against the run of play, the Irish Cup holders would find themselves level as Jamie McGonigle’s long range effort deceived Ballyclare ‘keeper Kyle Rowe and into the net. A minute later, the same player was released by Brad Lyons but his effort trickled by the far post.

The home side started the second-half on the front foot and almost forged ahead when Stephen O’Donnell’s header was saved by Rowe, before Josh Carson failed to hit the target from the edge of the box.

Coleraine fans thought they had scored just after the hour mark as Lyons’ deflected effort looked certain to find the net, but the midfielder’s shot smashed the post with Rowe rooted to the spot. Minutes later, Darren McCauley beat three markers before curling an effort wide off the far post.

Oran Kearney’s men blew a huge sigh of relief on 68 minutes as Dean Youle was unmarked at the back post and his header was cleared off the line by the alert Josh Carson.

Eoin Bradley was called from the bench on 66 minutes and the former Glenavon striker should have given the Bannsiders the lead as he fired over from McGonigle’s centre, before being denied by the body of Rowe after McConaghie split the Ballyclare defence with a superb over the top ball.

Rowe was beginning to become a thorn inside the Stripes attack as he dived low to keep out Lyons effort after the midfielder was cleverly spotted by Stephen Lowry.

However Ballyclare would suffer heartache at the end as McGonigle passed to Ian Parkhill and the substitute found the bottom corner with a delightful effort beyond the reach of Rowe to ensure the Bannsiders’ name will be in the hat for Saturday’s third round draw.