WITH the on-going help of club historian Hunter McClelland, colerainefc.com brings you the latest instalment of the ‘Down Memory Lane’ series as Paul Gaston got our 2002/03 Irish Cup campaign off to a winning start… 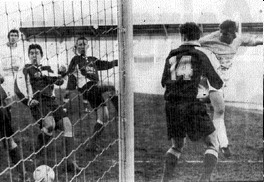 Two goals from defender Paul Gaston booked Coleraine a place in the sixth round of the Nationwide Irish Cup at the Showgrounds this afternoon.

Gaston struck once in each half to take his total for the season into double figures and only some fine goalkeeping from Andy McDonald kept the Bannsiders from running up the kind of scoreline that would not have flattered them.

Coleraine were comfortably in charge but it took defender Paul Gaston to show the way with a goal after 16 minutes.

It was largely a tale of spurned opportunities by Coleraine. Twice in the first half goal-line clearances denied the Bannsiders. Mark Parker, who replaced the injured Garth Walsh after 17 minutes, was on hand to nod away defender Gareth McAuley’s header with keeper Andy McDonald beaten.

Earlier James McDonagh came to Larne’s rescue after McDonald missed a shot from the industrious Sean Armstrong. Armstrong, who has just signed a new two and a half year professional contract, and Jody Tolan were both guilty of numerous missed chances. Larne seldom threatened but in the 25th minute Mark Craig found Parker who brushed past defender Gerry Flynn only to send a rising shot over the bar as keeper Davy O’Hare came out to meet him.

Coleraine were awarded a 36 minute penalty after defender Owen Montague sent skipper Pat McAllister tumbling inside the box. Midfielder Beatty stepped up and fired in a shot which McDonald did well to turn away at the near post.

Larne were almost in early in the second half when Andy Waide released Ronnie Burns but across came defender Flynn to get in a superb tackle denying Burns the chance to shoot.

Coleraine ensured their safe passage with Gaston grabbing the second with a close range header from a Beatty corner in the 59th minute. Larne keeper McDonald made a brilliant save to deny Hamill after he had fired in a shot from the edge of the box.