WITH the on-going help of club historian Hunter McClelland, colerainefc.com brings you the latest instalment of the ‘Down Memory Lane’ series as five-star Coleraine swept aside Warrenpoint Town at Milltown… 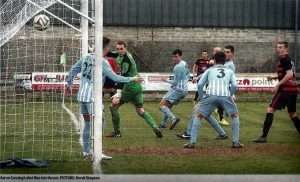 Oran Kearney praised his young Coleraine side after their five star demolition of Warrenpoint Town at Mill-town on Saturday.

The Bannsiders were ruthless as they put Barry Gray’s side to the sword.

The visitors ripped into Warrenpoint from the first whistle, and found themselves 4-0 to the good at the break.

A brace from Brad Lyons, a superb finish from Aaron Canning and a penalty from Neil McCafferty all but wrapped up the game after only 45 minutes.

Gary Browne added the fifth late on to complete a fantastic day for Coleraine.

“We have been threatening to do that for a while,” Kearney told Times Sport after the game.

“The funny thing is we have probably played better in other games but we didn’t take our chances.

“Today though we were ruthless in front of goal and fully deserved to win the game.”

Coleraine opened the scoring on 27 minutes when Matthew Snoddy played in Neil McCafferty. His shot from 12 yards was well saved by Parr but he could only push it into the path of Brad Lyons, who slotted home from close range.

They doubled their lead just three minutes later with a superb finish from Aaron Canning. McCafferty’s corner fell to the defender at the near post and he lashed the ball home from an acute angle through a crowd of players to make it 2-0.

The Bannsiders extended their advantage five minutes before the break when the Warrenpoint defence failed to clear and when McCauley stood the ball up to the back post and there was Northern Ireland Under-18 international Lyons to nod home unmarked for the third.

Things then went from bad to worse for Barry Gray’s men two minutes later when Referee Andrew Davey adjudged Darren King to have pulled Sn-oddy back in the box.

The official pointed to the penalty spot and McCafferty sent Parr the wrong way from the spot to make it 4-0 and put the result beyond doubt.

Coleraine then put the icing on the cake of a professional performance when Gary Browne, only on as a substitute for two minutes, expertly sidefooted home from ParkhilTs cross from the right.

Kearney praised the contribution of teenage star Lyons after he notched his first goals for the club.

“They were two good finishes by Brad,” he said.

“People may think the first is only a tap in but he made the intelligent run to be in the right place at the right time to finish.

“The second was also a good finish after some great work by Darren McCauley.

“I’m delighted for Brad, he is a great kid who has so much potential.

“He knows he still has a long way to go, but he wants to learn and work hard which is fantastic and he will get his rewards for that.

“We have a great dressing room here. The experienced players have been invaluable for the young guys and he them so much.

“I’ve been in dressing rooms in the past where the experienced players see the young guys as a threat.

“But that is certainly not the case here, we all work together and help each other out and that will only help us as a team.”