WITH the on-going help of club historian Hunter McClelland, colerainefc.com brings you the latest instalment of the ‘Down Memory Lane’ series from the last time the Bannsiders met Cliftonville on the opening day of the season… 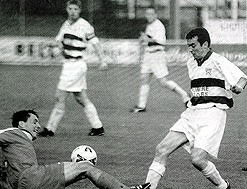 No goals at the Coleraine Showgrounds and not a great deal of excitement either in this Premier Division opener.

Coleraine, with their influx of high profile signings, failed to impress although they did carve out the first goalscoring chance on 21 minutes when Pat McAllister sent Stephen Beatty through but excellent work from Reds ‘keeper Paul Stranney resulted in a hastily hit shot over the bar.

The visitors might have taken the lead themselves on the stroke of half-time when a powerful left foot volley from Francis Murphy forced an outstanding reflex save from Ian Martin.

A flying header from Jody Tolan nine minutes after the break was Coleraine’s only contribution in the second period while Cliftonville wasted an effort from Chris Scannell when he panicked and sliced a right foot shot wide when perfectly placed.