WITH the on-going help of club historian Hunter McClelland, colerainefc.com brings you the latest instalment of the ‘Down Memory Lane’ series as the Bannsiders sealed a 2-0 success against Dungannon Swifts in 2012… 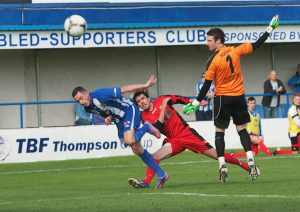 COLERAINE extended their unbeaten run to six matches and kept the pressure on at the top of the table with a 2-0 victory over Dungannon Swifts, secured by first half goals from Stephen Lowry and Paul Owens.

It was actually the visitors who had the first clear sight of goal, as Matt Hazley brought down Michael McKerr’s cross and held off a couple of challenges before blasting the ball over the bar.

But Coleraine didn’t take much longer to get going, taking the lead after 14 minutes. Gavin Cullen’s long ball over the top was flicked on by Darren Boyce and Lowry collected it and took it round a defender before firing into the bottom corner.

The second goal came on 20 minutes as Curtis Allen slipped the ball through to Owens, who capitalised on some hesitancy from Emmet Friars, to burst past him and poke the ball past the advancing Niall Morgan from a tight angle.

Darren Boyce was making his 200th appearance in Coleraine colours, but his hopes of marking the occasion with a goal were ended in the 22nd minute as he limped off injured, being replaced by Mark Gillan.

Coleraine continued to dominate and Ruairi Harkin was inches away from adding a third goal as he held onto the
ball through a number of tackles before drilling the ball low past the post. Dungannon had a big chance to half the deficit before the break as McKerr forced his way into the penalty area, but Cullen saved the shot with his legs.

The second half was a largely uneventful affair, as Coleraine protected their lead well, albeit without creating too many chances to extend it. Owens was denied twice in quick succession from a Harkin corner that was headed back across goal, well-timed blocks frustrating his efforts. Harkin also struck the post with a free kick which had Morgan beaten.

Dungannon rarely threatened Cullen’s goal, the closest they came was from a miss-hit cross from defender Adam McMinn, which clipped the top of the crossbar before being cleared.