WITH the on-going help of club historian Hunter McClelland, colerainefc.com brings you the latest instalment of the ‘Down Memory Lane’ series as the Bannsiders registered a 2-0 win against Ballymena United in September 2017… 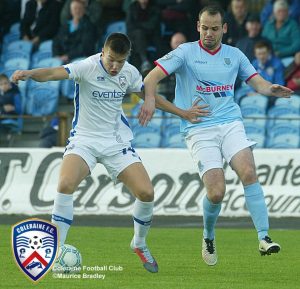 COLERAINE remain top of the Danske Bank Premiership after their 2-0 victory over local rivals Ballymena.

It was a bitterly fought contest at the Ballymena Showgrounds, in a derby which has grown in stature in recent seasons.

The win sees the Bannsiders extend their unbeaten run to 9 games and gives them a 4 point cushion over nearest challengers Linfield.

The first meaningful chance of the game fell to the home side on 3 minutes. Tony Kane’s corner was headed towards goal by Johnny Flynn but his effort was cleared off the line. The Bannsiders had a great opportunity of their own on 10 minutes. A mazy run from Ciaron Harkin allowed him to release Eoin Bradley but he failed to find his feet and missed the target.

In the opening 20 minutes Brad Lyons and Eoin Bradley had further chances for Oran Kearney’s side but both efforts failed to find the back of the net.

The Bannsiders had a penalty claim turned down mid-way through the first-half. Eoin Bradley seemed to have beaten the Ballymena defence before he went down inside the area but referee Andrew Davies waved away the appeal.

Moments later Coleraine grabbed the go-ahead goal. Darren McCauley’s floated delivery from a free-kick seemed to have deflected off the head of a Ballymena defender as the ball drifted into the danger area. Stephen O’Donnell capitalised at the back post and the defender made no mistake in nodding home from close range, taking his goal tally to 3 for the season.

Ballymena searched for an equaliser just before half-time. Joe McKinney almost got on the end of a Conor McCloskey cross but to no avail. Moments later Tony Kane had a great chance to pull his side level after the Coleraine defence failed to deal with a cross but the midfielder steered his header over the bar.

Ballymena started the second-half the brighter of the two teams. David Jeffrey’s side threatened on a couple of occasions with Leroy Millar having the best of the chances as he flashed a free-kick narrowly over the crossbar.

However, Coleraine doubled their advantage just before the hour mark. Eoin Bradley latched onto Stephen O’Donnell’s flick on before teeing up Jamie McGonigle, the young forward made no mistake in dispatching his effort to double his side’s advantage. McGonigle went close moments later only but his effort was blocked by veteran defender Jim Ervin.

Ballymena remained resilient as they searched for an in-road back into the game. Cathair Friel looked to have pulled a goal back for the home side on 67 minutes. The striker got on the end of a cross but his header went narrowly wide of the post. Tony Kane also had a half-chance to pull a goal back but his effort was easily saved by Chris Johns.

The game fizzled out in the closing minutes with little to report in terms of chances. Coleraine forward Eoin Bradley limped off after he collided with the Ballymena goalkeeper. The victory means that Coleraine remain league leaders and their unbeaten start to the season continues.