WITH the on-going help of club historian Hunter McClelland, colerainefc.com brings you the latest instalment of the ‘Down Memory Lane’ series as the Bannsiders produced a stunning comeback to earn a 3-3 draw against Crusaders in January 2018… 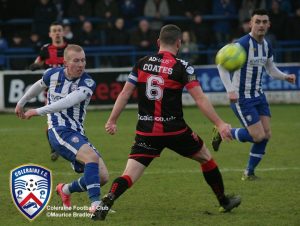 COLERAINE produced a stunning second-half comeback to earn a share of the spoils in a pulsating match at The Showgrounds . . .

The Bannsiders trailed 2-0 and 3-1 against their title rivals, but second-half goals from Jamie McGonigle (2) and Darren McCauley was enough to secure a point in front of a bumper crowd on the Ballycastle Road.

The first chance arrived on three minutes as Ciaron Harkin’s delivery found Stephen O’Donnell inside the penalty area. The big central defender – who signed a new contract extension on Friday evening – headed the ball into the six yard box but nobody in blue and white was there to profit from close range. At the other end, Paul Heatley and Jordan Forsythe played a neat one-two but the latter failed to keep his effort on target.

On 16 minutes, the Stripes had a glorious chance to take the lead as a poor defensive clearance landed to the feet of O’Donnell but his strike went over the crossbar. A couple of minutes later, Stephen Dooley showed trickery and picked out Brad Lyons on the edge of the box, but he failed to test Sean O’Neill.

After being the better of the two teams for the opening 35 minutes, the Bannsiders would find themselves 2-0 down inside a matter of minutes. The first arrived when a long ball found Gavin Whyte inside the area and the winger eased past Aaron Traynor before finding the net with a drilled effort. Then, Adam Mullan and Ciaron Harkin were caught after a loose pass from a quick free-kick by Paul Heatley and he struck the post with the ball landing to the feet of Whyte for an easy tap-in.

Things nearly went from bad to worse for the Bannsiders moments later as Jordan Owens had an effort disallowed for offside, before the striker headed over from Whyte’s cross. The Stripes were to carve out one final chance as O’Neill dived low to deny Lyons from distance.

The home side needed a strong start to the second-half and that duly arrived on 48 minutes as Lyons seized possession in the middle of the park and found the run of Eoin Bradley. The striker bore down on goal and after being tackled by O’Neill, the ball landed at the feet of McGonigle who made no mistake. However, the excitement was short lived as Heatley and Owens played a neat one-two and the winger made no mistake as he slotted the ball home.

The game would change on its head on 63 minutes as Crusaders skipper Colin Coates was dismissed for a second bookable offence as he brought down Bradley. Oran Kearney’s men needed a lifeline and it arrived in spectacular fashion on 69 minutes as McGonigle cut in on the by-line and lashed home from 25 yards to reduce the arrears to a single goal. It was almost deja-vu after that as Heatley ran clear but Johns was there to claw his effort away.

That was to prove to be a crucial save as Dooley held the ball up inside the area he found substitute Martin Smith at the edge of the area. The Englishman looked up and crossed for McCauley who headed the ball home for the equaliser. With a fantastic atmosphere and the momentum in the

Bannsiders’ favour, the home side nearly found a late winner as O’Donnell headed wide from a corner, before Sean Ward acrobatically cleared Bradley’s chipped effort off the line.

“I am fiercely ambitious” – OK