WITH the on-going help of club historian Hunter McClelland, colerainefc.com brings you the latest instalment of the ‘Down Memory Lane’ series as the Bannsiders registered a New Year’s Day win against Larne in 2008… 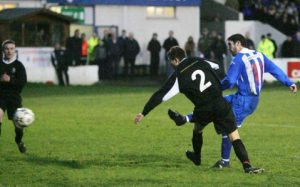 COLERAINE got the New Year off to a stunning start with this comfortable defeat of basement boys Larne at The Showgrounds.

Gordon Patton grabbed the first goal of 2008 with a simple close range tap-in after Tommy McCallion pounced on a poor clearance by Chris Keenan to square the ball to his unmarked team-mate.

And David Patton made it 2-0 on the hour with a towering header from a John Watt ball into the middle of the area.

The Bannsiders looked home and dry on 66 minutes with their third, a Stephen Carson drive past Keenan after he took the time to control a cross from the right flank.

They rubber-stamped the points just three minutes later when David Patton finished comfortably from a Watt cross for his second of the game.

Larne did pull one back through Paul Hamilton 85 minutes but it was scant consolation for a side still two points adrift at the bottom of the table.