WITH the on-going help of club historian Hunter McClelland, colerainefc.com brings you the latest instalment of the ‘Down Memory Lane’ series as two first-half goals were enough to earn all three points against Warrenpoint Town in October 2015… 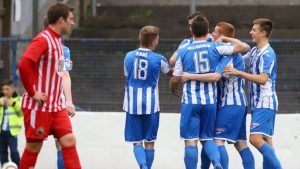 It didn’t take long for the first chance of the match to be created as James McLaughlin, who was reinstated to the starting line up, tested Aaron Shanahan from distance but the ‘keeper made a routine save.

However, the basement club threatened on more than one occasion to break the deadlock as Liam Bagnall headed wide following a neat passage of football from the visitors. Moments later, Daniel Hughes found space at the edge of the box and fired a well hit effort wide of the far post.

On 18 minutes, Barry Gray’s men should have scored as the impressive Hughes picked up a pocket of space in the Coleraine penalty area and found the run of Conor McDonald. The wide man burst into the box but had his shot saved by Michael Doherty.

The trickery of Daniel Hughes was beginning to be a thorn in the Coleraine defence and he had another effort wide, before hitting a well driven shot that had to be deflected wide by Steven Douglas.

Warrenpoint’s lack of composure in front of goal was to haunt them as Darren McCauley found the ball in the box from a throw-in and the Derry man had the technical ability to lob Shanahan for his first goal of the season.

On the stroke of half-time, the home side doubled their advantage as extremely poor defending from Warrenpoint led to James McLaughlin pouncing home from 10 yards to give the Bannsiders breathing space at the interval.

In a slow start to the second-half, the Co.Down side ought to have forced a way into the match on 58 minutes as a fantastic delivery from Mark Hughes found McCabe at the back post and he missed the target from 2 yards.

On 62 minutes, the Stripes nearly sealed all three points as a pin-point delivery from Neil McCafferty found Rodney Brown in the area and he nodded into the bottom corner. Unfortunately for the ex-Linfield man, the linesman raised his flag for offside.

The arrival of Stephen Hughes seemed to give Warrenpoint Town an added boost in the attacking areas and he nearly managed to give the visitors a lifeline but he was denied by an excellent save from Doherty.

The Stripes had their ‘keeper to thank once more to deny McCabe on two occasions as ‘Point created chance after chance. Coleraine were comfortable after that and nearly made it 3-0 as McCauley and McCafferty failed to find a way past Shanahan as the Bannsiders sealed all three points.