WITH the on-going help of club historian Hunter McClelland, colerainefc.com brings you the latest instalment of the ‘Down Memory Lane’ series as the Bannsiders put on a show on Sky Sports with a 3-0 win against Glenavon… 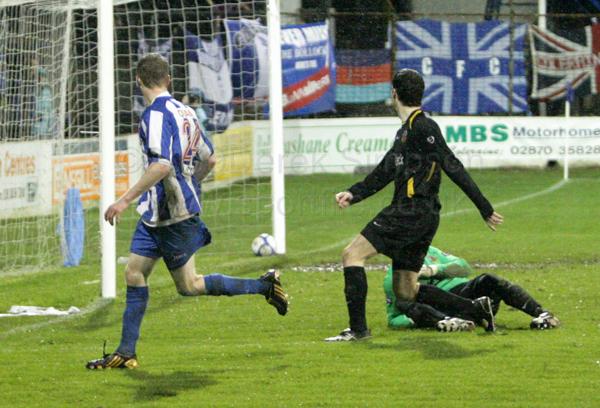 A SUPERB second half performance earned Coleraine a deserved three points in their Carling Premiership match against Glenavon.

Rory Patterson and Eunan O’Kane got the goals which ensured Coleraine’s home Sky Sports debut was a successful one.

The heavy rain and strong wind made conditions less than ideal, but Coleraine adapted well in the first half and had the best chances to open the scoring. Early on O’Kane played Patterson through but the striker saw his shot from distance saved well by Tuda Murphy in the Glenavon goal. Then there was controversy as Patterson looked to have put Coleraine in front, applying the finishing touch after Mukendi had shot, but the Strabane man was ruled to have been offside and the goal was chalked off.

O’Kane saw legitimate claims for a penalty waved away after his shot was diverted wide by the arm of a defender and from his corner, Glenavon’s Ryan Harpur headed against his own bar. There were some scares before the break, as a shot from Walsh went all the way through, bypassing a couple of attackers as it went for a goal kick and just before the break an overhead effort from Molloy just missed the target.

At the other end, Boyce missed a good chance, shooting across goal and wide after good work by Harkin in the build up.

Coleraine stepped up the pressure at the beginning of the second half and really should have gone ahead as Boyce headed over the bar from close range. The same player was then put clear by a classy backheel from Patterson, but dallied too long over his shot and missed the opportunity.

O’Hare made an important save at the other end to keep the scores level and ensure Coleraine wouldn’t regret those missed chances. The goal Coleraine deserved finally came on 58 minutes as Carson sent the ball low across the six yard box and Patterson slid in to make the connection and turned the ball home. Just a few minutes later, referee Trevor Moutray waved away penalty appeals from Glenavon as Molloy went down under a challenge from O’Hare after the Glenavon number 10 had seen an ambitious free kick deflected behind by the defensive wall.

Coleraine added a second goal on 69 minutes as Boyce capitalised on a slip by a defender, stealing the ball and taking it forward before feeding O’Kane who found the net from close range. Carson blasted a shot over the bar after cutting in off the left flank, but the best was yet to come from Coleraine as O’Kane made the game safe with an exquisite third. Patterson floated the ball across to the far post to O’Kane, who took one touch to take the covering defender out of the equation before slotting the ball through Murphy’s legs with his second.

Murphy denied Patterson a second while a great spell of possession football from Coleraine saw a flowing move culminate in Howard Beverland going desperately close to scoring his first Coleraine goal, only to see his shot saved by Murphy