WITH the on-going help of club historian Hunter McClelland, colerainefc.com brings you the latest instalment of the ‘Down Memory Lane’ series as the Bannsiders mounted an extraordinary comeback to defeat Larne in last season’s Irish Cup… 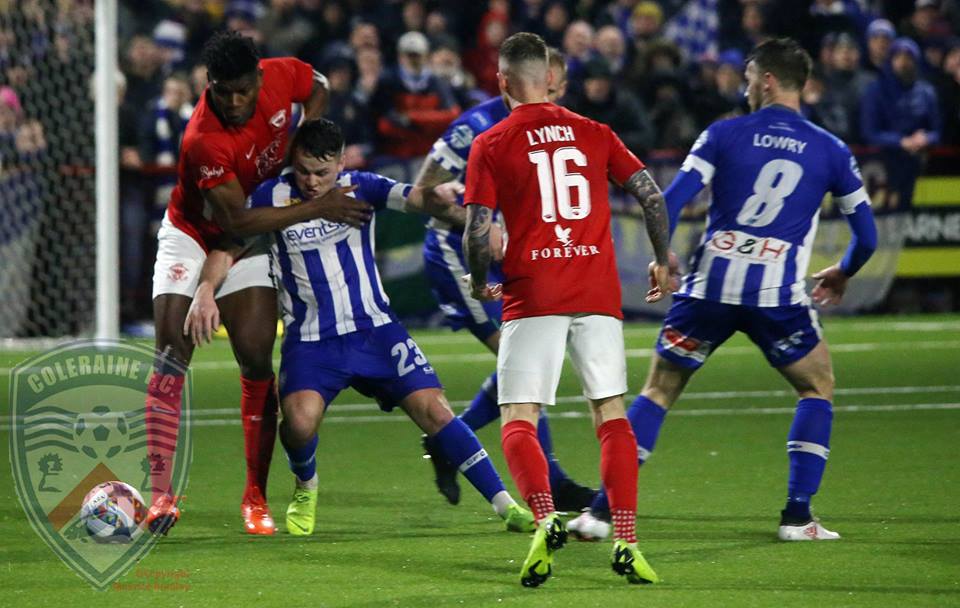 The Bannsiders trailed 2-0 at half-time and 3-2 with five minutes go but Jamie McGonigle’s injury-time equaliser sent the game into extra-time. The Stripes took the lead on 92 minutes via Ben Tilney’s own goal, before McGonigle scored a sublime second on 116 minutes to book Rodney McAree’s side into the hat for the semi-final.

It was the home side who made the stronger start in front of the BBC cameras as a superb pass from Davy McDaid found the run of Martin Donnelly, and after the winger was flagged for offside, Lee Lynch tapped into an empty net but it was disallowed. Moments later, Larne threatened again as Ben Tilney’s superb delivery was headed wide by McDaid.

That pressure finally paid dividends for the Inver Park side as they made the breakthrough on 21 minutes as Lynch’s pin-point cross found McDaid and the striker pounced at the second attempt after Chris Johns failed to save his initial effort. That lead should have been doubled two minutes later as Johns made amends to make a world class save to deny McDaid from close range.

However, Larne’s advantage would be strengthened just after the half hour mark as a neat passage of play involving Tomas Cosgrove, Fued Sule and Lynch teed up Tilney who squared for McDaid who applied a simple finish from close range.

Rodney McAree’s men weren’t at the races in the first-half with a speculative effort from Aaron Burns being their only chance of note as their quest to keep their hands on the Irish Cup trophy laid in tatters at the interval.

Coleraine shuffled their pack early doors in the second-half as Josh Carson and Jamie McGonigle were introduced before the hour mark and Coleraine found a lifeline on 60 minutes as Ben Doherty’s clever header picked out Eoin Bradley and he made no mistake by finding the bottom corner.

The game began to stretch as both sides craved to notch the vital fourth goal of the game with Johns called into action to deny McDaid, before Bradley fired over at the other end after holding off his marker inside the area. On 69 minutes, the Coleraine faithful thought they found an equaliser after a terrific cross by Aaron Canning was headed wide by McGonigle.

On 82 minutes, Coleraine were awarded a spot kick as Stephen Lowry was brought to ground by Graham Kelly inside the area leaving referee Andrew Davey with no hesitation in pointing to the spot. The responsibility was given to Bradley who rifled home his spot kick straight down the middle.

Remarkably, that joy of getting back into the game was short-lived as Tiernan Lynch’s men grabbed the lead with only five minutes to go as a clever turn and through ball by Jeff Hughes found McDaid who slammed home his hat-trick.

The Stripes knew that they would have to throw the kitchen sink at Larne if they would force extra-time and the travelling support were in raptures in added time as McGonigle fired a delightful effort on the turn into the bottom corner to force another 30 minutes of action.

Defensive injuries to Mark Edgar and Aaron Canning looked certain to derail the visitors as extra-time started but within two minutes the Bannsiders gained the lead for the first time in the match as James McLaughlin’s pass was turned into his own net by Tilney on 92 minutes.

At the other end, substitute Darren Tear picked up possession inside the area but his shot was expertly saved by Johns as Coleraine survived. Due to using all four substitutes, defender Aaron Canning was utilised as a striker as the Limavady man was struggling due to a knock.

The game was put to bed on 116 minutes in spectacular fashion. The Stripes managed to clear their lines from a corner and the ball landed at the feet of Bradley who managed to run past the halfway line and find McGonigle. The Northern Ireland under-21 international showed lightening pace to run past Tear and cut in on his favoured right foot and power home from a tight angle.

A game that will live long in the memory as Coleraine reach the final four of the Irish Cup for a third successive year.