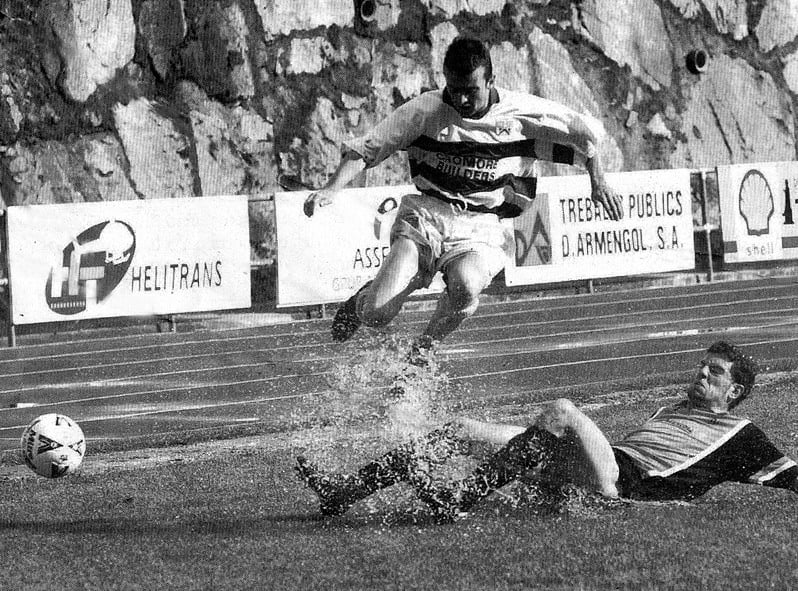 Not even thunderbolts, lightning and a very frightening afternoon in Andorra could deny Coleraine their place in the next round of the Intertoto Cup.

There was high drama as Marty Quinn’s men endured a nightmare experience in the tiny principality. Storm clouds rolled in half an hour before the scheduled kick off. The players were rushed off the pitch as
darkness closed in, the eeriness only intermittently broken by freakish forked lightning. A cloudburst followed and as thunder rolled around the Pyrenees, the game looked to be in jeopardy.

Sant Julia, nestling in the valley, was engulfed in heavy rain and kick-off was delayed 50 minutes. Coleraine’s latest signing, central defender Gareth McAuley, who was only cleared to play by UEFA 24 hours before the game, snatched the equaliser with a super header in the very last minute.

It was a lightening strike from the man of the match which left the Andorrans deflated. Thunder was still rumbling menacingly in the distance when the match started. The rain continued in torrents but both teams made the most of a bad situation.

Coleraine came out of the traps firing on all cylinders and they got off to a superb start when Michael McHugh scored after only eight minutes, capitalising on an error by keeper Ivan Perinaez.

But the strike only served to galvanise the Andorrans and they mounted a series of raids. They finally managed to find the net but only after an assist from midfielder Ian McCoosh who unceremoniously upended striker Bertrand Petit inside the penalty area – Petit dusted himself down before drilling the spot kick out of keeper Davy O’Hare’s reach.

Coleraine lost their way after that and the Andorrans thought they had secured a meaningless victory with a second goal on the hour from Oscar. However, every cloud has a silver lining and 22-year-old McAuley brilliantly guided a header past Perianez to equalise. And in the ultimate irony, the game finished in glorious sunshine!