COLERAINE and Motherwell actually played each other at The Showgrounds back in August 1983, but the stakes that evening were far less than what they are on Thursday night… 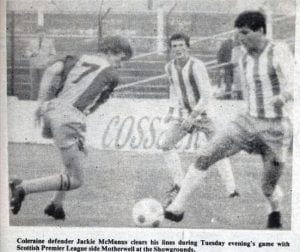 A sparkling goal from Coleraine striker Raymond McCoy was the highlight of the Bannsiders’ pre-season friendly against Motherwell at The Showgrounds on Tuesday evening.

The 19-year-old Cookstown lad, who hit the net 23 times last season, brought a somewhat ordinary game to life in the 50th minute with a touch of sheer class. He gathered the ball on the edge of the penalty area and waltzed past two defenders, forced ‘keeper Hugh Sproatt to commit himself and then cheekily tucked a shot into the left hand corner of the net.

The effort was spectacular had the spectators – what few there were for this benefit for Eugene McNutt – buzzing with excitement. Sadly, though, there was precious little else for them to talk about.

Both teams were obviously warming up for the season ahead. There were plenty of efforts but the goals were as scarce as the fans.

Motherwell manager Jock Wallace used the occasion to give several new signings a run out and it was a fairly useful exercise for his players. The Premier League side went in front after 11 minutes with Junior Burns getting all the time in the world steer a header past ‘keeper Vincent Magee. The slack marking must have given boss Tony Curley some food for thought.

Coleraine strung together some nice moves but faltered when it came to finishing power. Ricky Wade and Pat Mullan had tremendous first half chances but failed to deliver the goods. McCoy, on the other hand, was spot on five minutes after the interval. One wonders just what thoughts crossed Wallace’s mind as he watched the youngster he has shown an interest in dance around his defenders with nonchalant ease.

The Scots should have grabbed a winner with 12 minutes left when Stuart Rafferty found himself through with only Magee to beat but he stabbed the ball well wide. 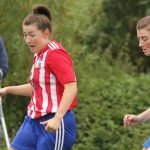 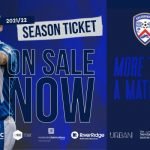