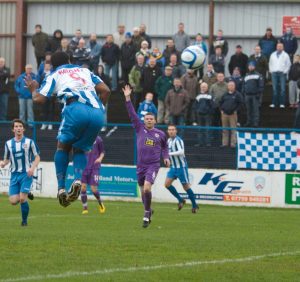 TWO goals from Leon Knight and one from Stephen Carson helped Coleraine to a 3-1 win over an undisciplined Cliftonville side, who finished the game with ten men after the sending off of George McMullan.

Both sides traded half-chances early on, with Cliftonville having a couple of headed chances and Aaron Black going closest for Coleraine before the deadlock was broken in the 11th minute.

Carson whipped in a great cross and diminutive striker Knight leapt up to head the ball beyond the despairing John Connolly to put Coleraine in front.

Coleraine conceded a number of free kicks in dangerous positions, but for once George McMullan appeared to have left his shooting boots at home, driving one in to the wall, before lifting another well over the goal. The visitors’ best chance came as Rory Donnelly shot across the face of goal, his shot just shaving the far post as it went behind. O’Hare then made a relatively comfortable save from a Ciaran Donaghy header.

Despite not having much of the ball, Coleraine had on the whole limited Cliftonville to half chances and took a massive step towards winning the game with a second goal just before the break. This time Knight turned provider, threading the ball through to Carson on the left wing and he cut inside onto his right foot and curled the ball into the top corner.

Cliftonville were reduced to ten men shortly after the restart as McMullan clashed with Knight and then stamped on the Coleraine striker as he lay on the ground. Referee Hugh Carvill produced a red card and after a lengthy protest, McMullan eventually exited the field of play.

The visitors’ ill-discipline almost cost them another man as goalkeeper Connolly, who had been booked for his protests in the McMullan incident, swung a punch at Knight following a coming together in the six yard box, but despite the referee consulting the linesman, no card was produced.

They attempted to mount a recovery, with Stephen Garrett being denied by an excellent tackle from Howard Beverland, before Aaron Canning got the ball clear. Jonny Harkness, still looking for his first Coleraine goal, shot over the bar after a fine run forward, as Coleraine looked to make their extra man count.

The third goal which finally put the result beyond doubt came in the 77th minute as Darren Boyce sent Knight clean through on goal and with only Connolly to beat, there was no doubt that he’d find the net.

Soon afterwards, he was substituted to a standing ovation from the home support.

Cliftonville sub Martin Jones almost caught out Davy O’Hare with a fine lob, but the backpedalling Coleraine ‘keeper managed to claw the ball away and block a follow-up effort before Canning hacked the ball clear.

Coleraine hit the bar late on, before Cliftonville reduced arrears with a consolation goal, Garrett tapping in from close range.