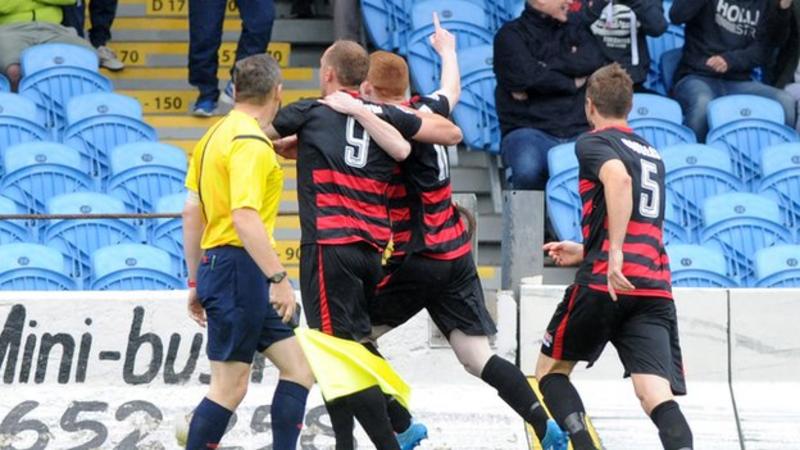 Ballymena United’s dismal start to the season continued as the Sky Blues went down 2-0 to derby rivals Coleraine to remain rooted to the foot of the table.

United boss Glenn Ferguson made seven changes to his starting line-up but his side went behind after two minutes when Sammy Morrow stroked the ball home.

McCafferty’s free-kick was deflected into the net after the break but was disallowed as it was taken too quickly.

Ferguson responded to Wednesday’s 7-1 hammering by Glenavon by dropping several of his established players from his starting side and handing a debut to 18-year-old centre-half Kyle Crawford.

Prior to the game it was also announced that two of the club’s more experienced players, Tony Kane and Gavin Taggart, had been transfer-listed with immediate effect.

The Braidmen conceded their 12th goal of the new league campaign when Rodney Brown flicked on a long ball out of defence and Morrow ran through to fire home his first strike since returning to the Bannsiders.

Lively teenager Matthew Shevlin then had a shot well saved by Michael Doherty after latching onto a poor back-pass by Ruairi Harkin.

Midfielder Canning extended the lead, Ian Parkhill was twice off-target, then Shevlin was well tacked by Steven Douglas as he was about to shoot inside the area.

Ballymena came into the match more in the second half but never looked like scoring, so Oran Kearney’s side comfortably cantered to their second victory in three games and their eighth in their last 12 visits to the Warden Street Showgrounds.

They looked to have extended their lead when McCafferty’s free-kick sailed into the net, with the aid of a Ballymena player, but referee Ian McNabb had not blown the whistle.

Ballymena substitute Darren Henderson also had an effort disallowed after flicking the ball into the back of the net.

For the hosts, it was only their second defeat in nine fixtures against their derby rivals but there will be more soul-searching in the dressing room following this third convincing reverse of the new season.