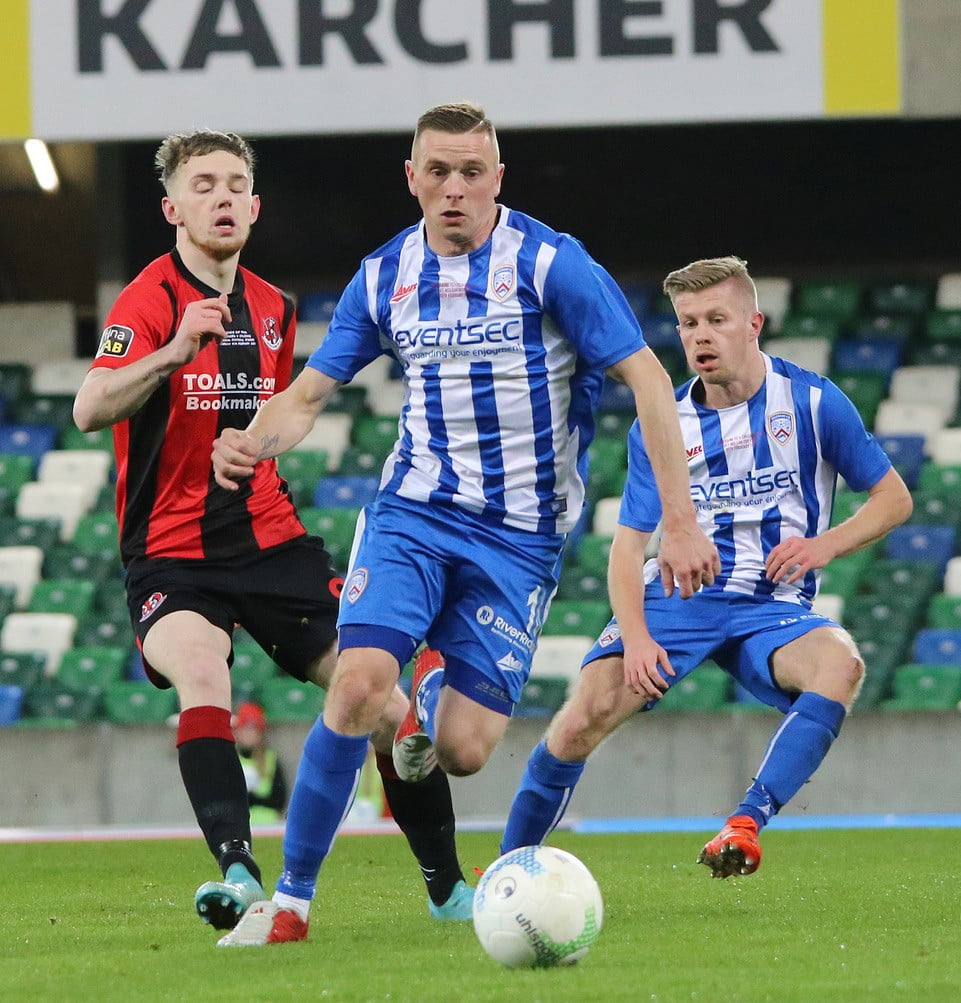 The Bannsiders made two changes to the starting eleven as James McLaughlin replaced the injured Eoin Bradley in attack, with Ian Parkhill coming into the fold at the expense of Stewart Nixon who was cup tied.

Crusaders made a strong start and took the lead after 10 minutes as Philip Lowry headed the ball into the path of Jamie McGonigle and the ex-Coleraine striker made no mistake from inside the box. Midway through the half, the Stripes would receive a blow as Aaron Traynor had to be substituted through injury and he was replaced by the returning Aaron Jarvis.

Just before the half hour mark, Coleraine would threaten the Crusaders goal for the first time as Jamie Glackin’s free-kick was met by McLaughlin but he couldn’t steer his header on target. Moments later, Crues stopper Sean O’Neill was called into action to dive low and stop a cross after neat football involving Glackin, Lyndon Kane and Josh Carson.

Crusaders looked dangerous every time they went forward and almost doubled their lead on 32 minutes as McGonigle cut in from the left-hand side and his driven effort was saved by Johns, before the ex-Southampton trainee was alert to gather Declan Caddell’s half volley from the edge of the area.

However, Coleraine would be awarded a penalty on 37 minutes as the lively Glackin went down after contact from Rodney Brown and Billy Joe Burns inside the area. Without regular spot kick taker Ben Doherty, the responsibility was given to Stephen Lowry who stepped up and stroked home a confident penalty from 12 yards.

On 53 minutes, Coleraine would hit the front as Josh Carson’s corner-kick wasn’t defended and with the ball in the air, McLaughlin rose highest to nod home his tenth goal of the season in front of a vocal East Stand.

Oran Kearney would be forced to shuffle his pack once again as defender Adam Mullan was unable to continue and he was replaced by Curtis Allen as Josh Carson deputised at left-back.

The next chance of note would arrive on 74 minutes as Glackin picked up a pocket of space and his fantastic through ball found the run of Ian Parkhill, but the Ballymoney man was thwarted by O’Neill. The North Belfast side were desperately chasing an equaliser and they had a sight of goal on 80 minutes as Lowry’s header was well gathered by Johns.

The Coleraine faithful were nearly celebrating a minute later as Allen picked out McLaughlin with a fantastic cross, with the striker inches away from finding the target and a precious third goal.

At the death, McGonigle missed a glorious chance to force extra-time as the in-form striker blazed over the crossbar from close range as Coleraine lifted their second senior trophy under Kearney.