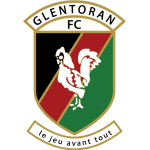 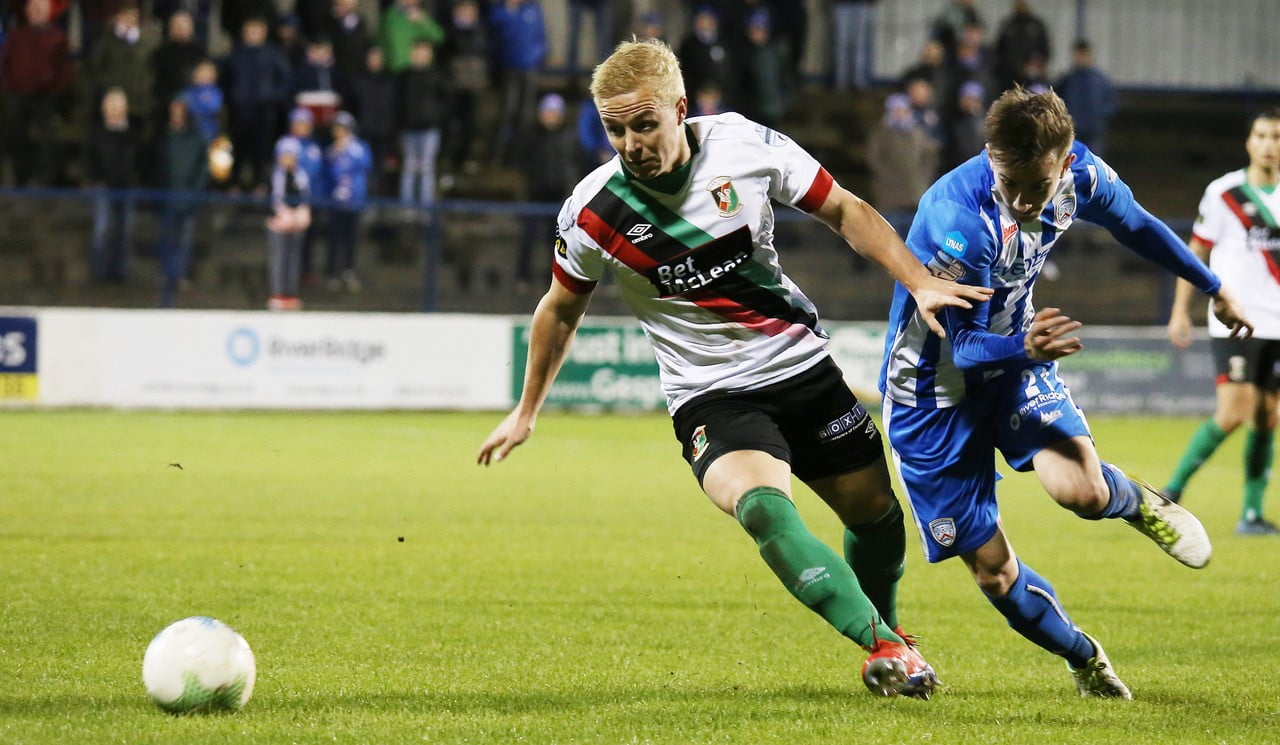 Goals from Jamie Glackin and Ben Doherty helped Coleraine into the quarter-final draw despite a late fight back from Mick McDermott’s side.

It was somewhat of a damp squib in the opening exchanges between Coleraine and Glentoran at The Showgrounds.

The visitors were reduced to ten men before the half hour mark as James McCarthy received his marching orders after picking up a second yellow card following a tackle on Jamie Glackin.

The Bannsiders appealed for a penalty shortly after as Lyndon Kane went down inside the area but the referee adjudged that Glentoran winger Salo Jallow won the ball with an outstretched leg.

With little to report by way of chances,  Eoin Bradley almost sparked the Stripes into life on 33 minutes. A great move allowed Jamie Glackin to feed the ball to Ben Doherty, his whipped delivery almost picked out Bradley inside the box but he failed to make a clean connection with the header towards goal.

Coleraine had the man advantage and should have grabbed the go-ahead goal in the match as Aaron Jarvis had an effort saved when well placed inside the area. Initially, a well-weighted ball forward from Aaron Canning fell to Bradley who slipped Jarvis through but he failed to find the finish.

Glentoran manager Mick McDermott introduced the influential Hrvoje Plum into the midfield in an attempt to quell the pressure from the home side. The Croatian had an immediate impact as he tested Chris Johns from distance.

Ben Doherty forced Elliot Morris into an acrobatic save before the interval but at half-time the scores were level, however, it was Coleraine who enjoyed the most meaningful chances of the first-half.

After the restart, Oran Kearney introduced Ian Parkhill and Josh Carson as the home side went in search of a goal against the 10 men of Glentoran.

Hrvoje Plum almost produced a trademark finish for Mick McDermott’s side before the hour mark as a left-footed strike from the edge of the box forced Chris Johns to make a save, diving low to his right-hand-side.

Coleraine’s persistence paid off on 60 minutes as substitute Ian Parkhill produced an expertly weighted cross from the left wing. The ball found the head of the advancing Jamie Glackin who glanced a header towards goal leaving Elliot Morris beaten all ends up in the Glentoran net.

Oran Kearney’s side extended their lead from the penalty spot on 66 minutes via Ben Doherty. Ian Parkhill evidently changed the game since coming off the bench, playing a great ball into Jamie Glackin who lost his man with some neat footwork before eventually being hacked down inside the area by Cameron Stewart. Up stepped Doherty and he duly converted from 12 yards to bag his fifth goal of the season.

Elvio Van Overbeek should have reduced the deficit shortly after as he was slipped through on goal by Plum but the attacker slammed the ball straight at Chris Johns.

Mick McDermott introduced Davidi Nasseri midway through the second-half as his side looked to graba foothold in the match. The former Gillingham man had an immediate impact as he popped up inside the area to dispatch Connor Pepper’s cross into the back of the net.

Johnny Frazer had the ball in the net for Glentoran shortly after but his effort was ruled out for offside, much to the delight of the home supporters as Coleraine edged through.