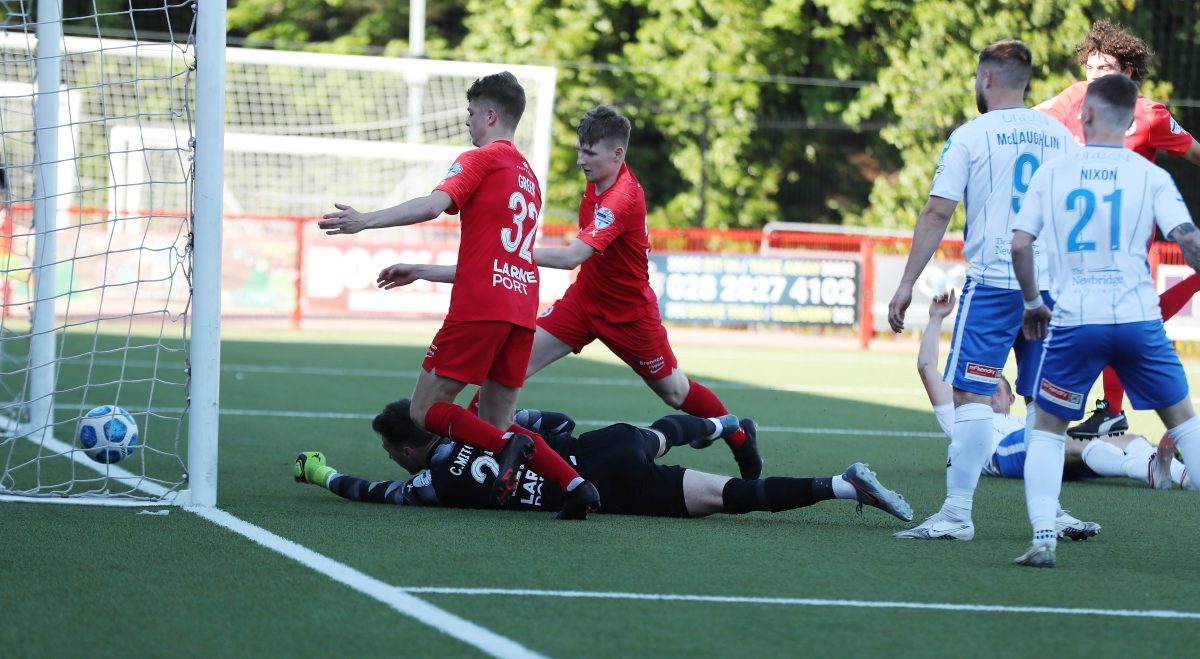 Oran Kearney’s side came from behind to win on a day when Steven Douglas hung up his boots at the age of 43 after a fantastic career.

It was a much changed Larne who grabbed the early advantage with a well worked ninth minute opener.

Andy Scott went on a fine run before teeing up Matty Lusty and the teenager showed why he is so highly rated by drilling his shot home from outside the box.

Curtis Allen looked set for a 21st minute tap in as Ben Doherty’s effort travelled goalwards after McLaughlin powered his way into the box, but Graham Kelly was on hand to make a timely intervention.

At the other end Lusty turned provider with an enticing ball across the six yard box which Johnny McMurray failed to finish off.

Marty Gallagher – highly impressive since coming into the team earlier in the season – then made a couple of fine saves.

First he blocked a Lee Lynch drive on 23 minutes and five minutes before half time tipped over a Lusty header from Conor McKendry’s cross.

The Bannsiders should have drawn level on the half four mark after Conor Mitchell had parried Jamie Glackin’s corner.

Allen reacted first but his shot struck the post before Aaron Canning had a follow up blocked and the ball was scrambled to safety.

The visitors had another opportunity as an entertaining first half drew to a close but Mitchell did well to deny McLaughlin’s header from an Allen cross.

Coleraine survived a let off within seconds of the restart as man of the match McKendry broke the offside trap but was thwarted twice by Gallagher.

Two goals in the space of eight minutes secured victory and second spot.

McLaughlin bundled in from close range after 49 minutes from Doherty’s cross.

With Glentoran beating Crusaders, Larne almost threw a spanner in the works when Scott’s cross was slashed against his own crossbar by a relieved Adam Mullan.

Coleraine saw out the rest of the game comfortably and indeed had further chances to add to their tally through Stewart Nixon, Doherty and Stevie Lowry.

It was fitting that Douglas – given a guard of honour by both teams before kick off – was given the captain’s armband as he came off the bench for the final few seconds of a season like no other.