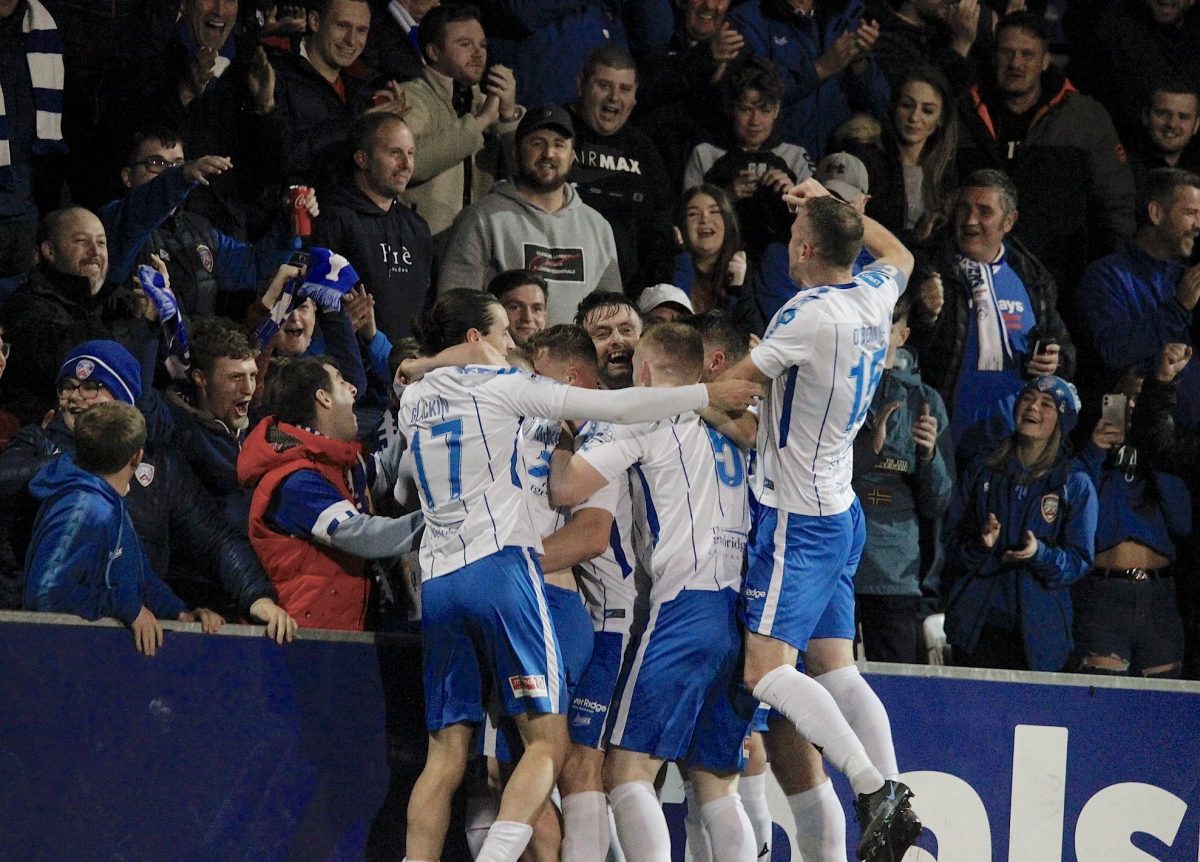 Boss Oran Kearney went with the same team won against Ballymena United last time out and they went close on four minutes as Aaron Traynor’s long range pass found Eoin Bradley outside the area. The striker cut in on his favoured left foot but his strike was straight down the throat of Johnny Tuffey.

On eight minutes, the hosts – who came into the game having won three and drawn one of their last four fixtures – went inches away from making the breakthrough as BJ Burns was released down the right-hand side and his cross was averted away by Stephen O’Donnell.

However, two minutes later, the visitors would hit the front as Josh Robinson could only flick Traynor’s pass into the onrushing Bradley and he made no mistake with a clinical finish into the bottom corner. The Crues would have plenty of possession but Gareth Deane was only called into action once in the first-half as he dived low to keep out Paul Heatley’s acrobatic effort.

Just after Matthew Shevlin was thwarted by the alert Tuffey, the final effort before half-time would arrive at the feet of midfielder Conor McKendry as he let fly from distance that forced the Crues ‘keeper into tipping his shot over the crossbar.

The first action after the break would arrive from the head of former Crusaders defender Rodney Brown as he guided Jamie Glackin’s corner towards the net but Tuffey denied him a goal on his return to Belfast. At the other end, a delightful cross from Ben Kennedy met Johnny McMurray at the back post but he couldn’t steer his header on target.

The travelling support would have a second goal to celebrate just after the hour mark as the Stripes doubled their advantage in fine style. A pass from Shevlin released Jamie Glackin on the left-hand side, and after his strike was tipped away by Tuffey, the ball was kept alive by Shevlin who crossed for Josh Carson to net for the first time in 51 matches.

Crusaders brought on the cavalry to get back into the contest but it was Coleraine who were still creating chances as Tuffey saved with his legs to deny McKendry after he was picked out by Shevlin. Minutes later, neat play by the Bannsiders allowed Stephen Lowry to have space inside the box but he also saw his shot saved by the excellent Tuffey.

A good performance from the Bannsiders on the road as Oran Kearney celebrated his 450th game in charge in fine style.