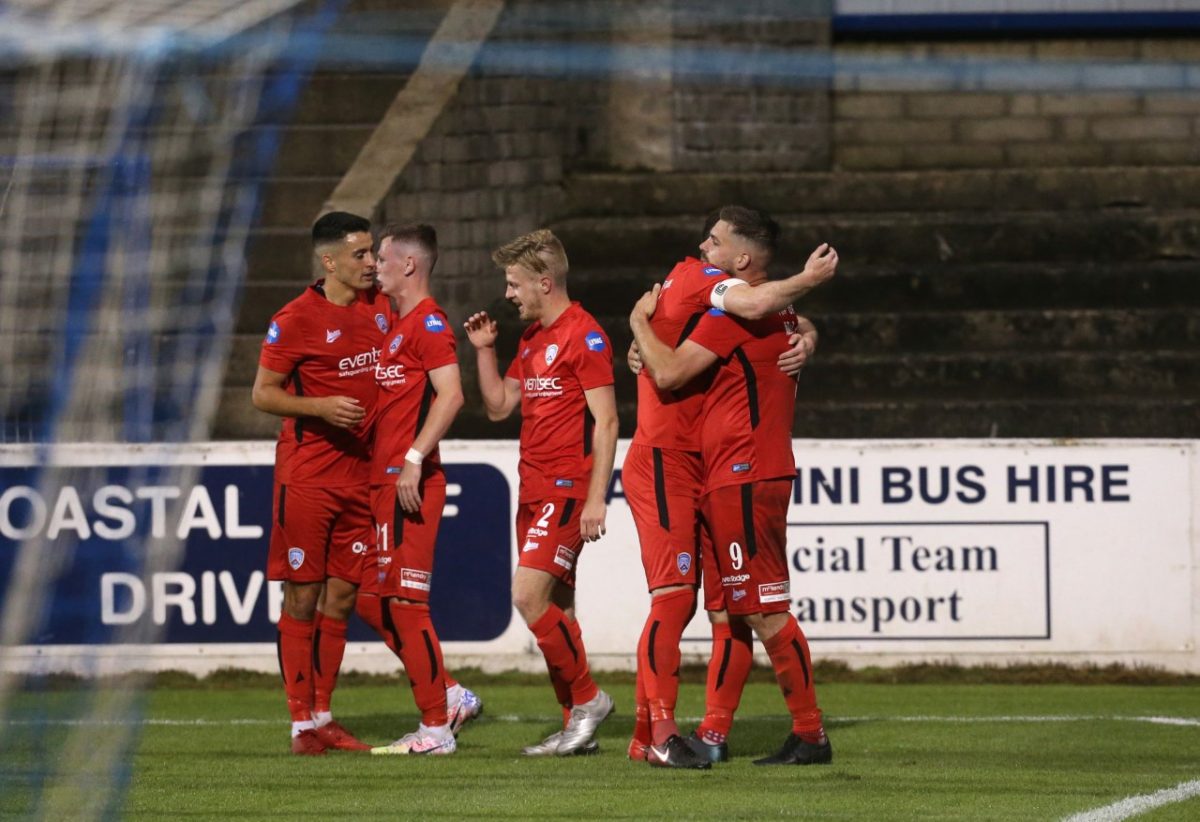 The Bannsiders went into the game as the bookies’ favourites and they lived up to their expectations, progressing safely to the second qualification phase thanks to a solitary strike from McLaughlin at the death.

The win sets up a glamour tie in Slovenia against Maribor next Thursday and clinches a first win in Europe for Coleraine for the first time in 17 years.

The game was a historic occasion for more than one reason as Oran Kearney’s men faced off against Sammarinese opposition or the first time in the club’s history.

A few meaty tackles early doors set the tone for proceedings as Josh Carson and Aaron Traynor slipped into the referee’s notebook but their challenges were brushed aside when Curtis Allen looked to have fired the home side in front on 18 minutes. The striker, who joined the club permanently from Glentoran this summer, composed himself well inside the area before curling a left-footed attempt narrowly wide.

Ben Doherty was in the thick of the action a moment later as he managed to control well outside the box before firing a rasping effort towards goal but to no avail. The Bannsiders started to turn the screw midway through the first half as Aaron Traynor crossed for Josh Carson – who had goal in his sight – but the winger forced a great save from Gianluca Vivan in the La Fiorita goal.

Lyndon Kane almost stole the headlines as he looked to have clinched the opening goal before the half-hour mark. The full-back, who was making his European debut despite over 100 appearances for the Bannsiders, fired low towards goal from inside the box but his effort was blocked away from danger.

Despite the pressure from the home side, La Fiorita launched a counter-attack and looked to forge ahead as Lucio Peluso crossed for the lively Christian Damiano but the cross failed to find the tall target man, eventually drifting behind for a goal kick.

With three minutes remaining in the first half, Ben Doherty teed up Stephen Lowry as the Bannsiders searched for a decisive goal. However, they were left frustrated once again as the ball was blocked behind for a corner.

The visitors enjoyed a golden opportunity as Armando Amati crossed to the back post but his delivery was well watched by Kane at the back post who marshalled the ball behind for a goal kick in what proved to be the final action of the first half.

Both sides cancelled each other out at the start of the second half. However, La Fiorita were almost gifted the opening goal as Gareth Deane spilt the ball from a cross but Aaron Canning was on hand to clear the danger.

Ben Doherty almost carved an opening shortly after but the attacker’s route to goal was blocked as Amati made a timely challenge to prevent a shot at goal. After Stewart Nixon’s arrival at half time, Oran Kearney introduced talisman striker Eoin Bradley after the hour mark as the Bannsiders searched for the opening goal.

James McLaughlin looked to have fired Coleraine ahead on 67 minutes. Initially, Stewart Nixon made a great run into the box before teeing up his teammate but the attempt was acrobatically tipped behind by Vivan. Stephen O’Donnell tried his luck moments later as he headed Doherty’s corner towards goal but the header drifted narrowly wide.

With 13 minutes to go, Aaron Jarvis had the ball in the net for Coleraine but his header from Nixon’s corner was ruled out for an earlier infringement inside the penalty area.

Perseverance paid off as James McLaughlin secured the win in the dying minutes for the home side. A great ball over the top from Traynor was well controlled by McLaughlin and the striker made no mistake by firing home past Vivan in the La Fiorita goal.