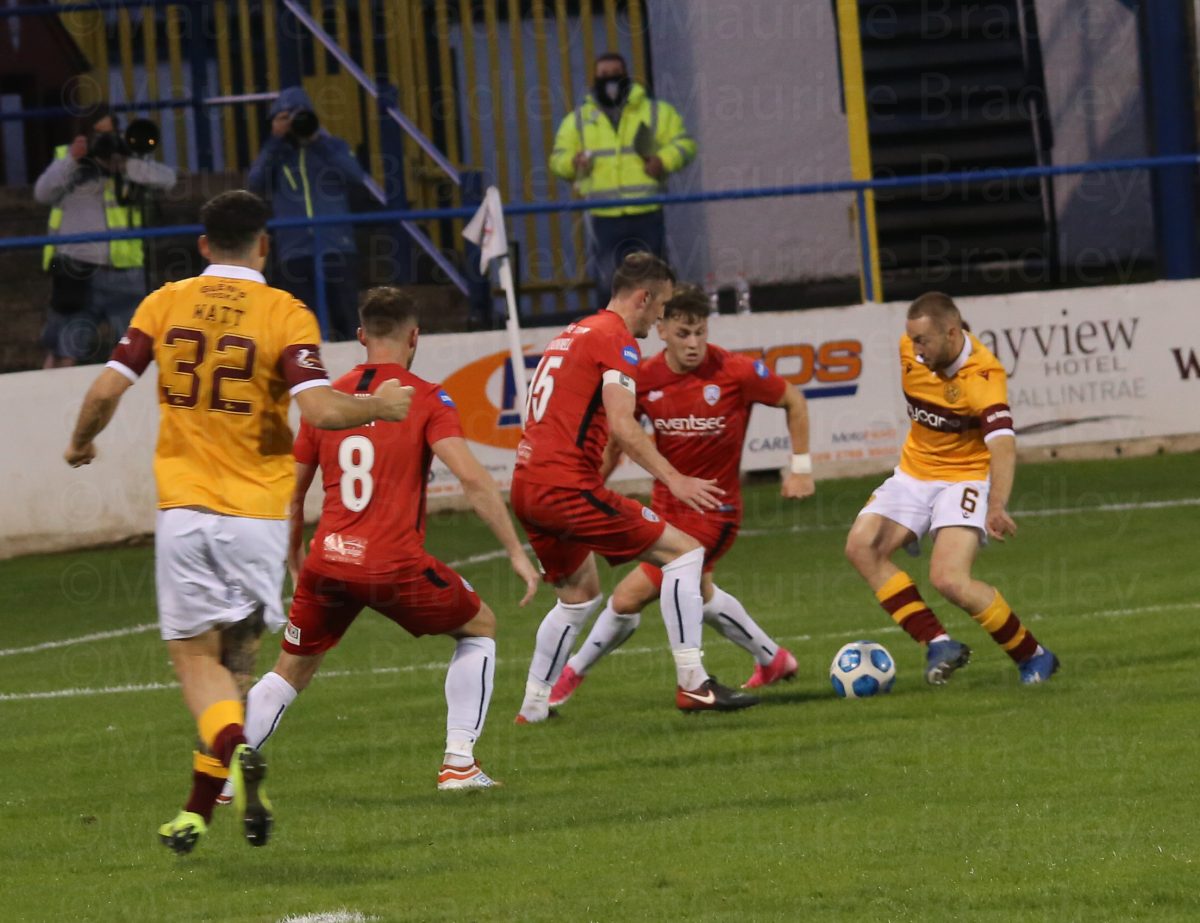 The Bannsiders trailed 2-0 at the break but turned the game on its head as Ben Doherty twice converted from the spot to send the tie into extra-time. After both clubs spurned great chances to bag the winner, the contest would be settled by a penalty shoot-out with Coleraine missing all three spot kicks to send the Scottish Premiership side through.

The visitors – who registered their first win of the Scottish Premiership last weekend – started on the front foot and should have taken the lead on seven minutes as Tony Watt teed up Stephen O’Donnell inside the box, but the full-back was denied by an excellent stop by Gareth Deane.

There would be a blow for the Bannsiders early doors as Aaron Jarvis went down injured after winning a header and he would be replaced by Jamie Glackin.

James McLaughlin, who had netted in the Bannsiders’ two European ties this year, almost made it three from three on 15 minutes as he glanced a header inches wide from Jamie Glackin’s free-kick.

That miss would prove costly less than 60 seconds later as Motherwell took the lead. A cross inside the box found Callum Lang and after the striker was denied at close range by Deane, he was on hand to prod home the rebound.

Motherwell looked threatening every time they went forward and they went close to doubling their advantage on 29 minutes as a long throw by O’Donnell wasn’t dealt with by Deane. The loose ball was seized upon by Declan Gallagher and his lobbed effort was cleared off the line by Aaron Traynor.

After Josh Carson blazed a shot over the crossbar, Motherwell would stretch their lead on 36 minutes as Lang’s lay-off found strike partner Tony Watt and his powerful strike went into the back of the net.

Oran Kearney’s men should have found themselves a lifeline before the half-time whistle as Lyndon Kane’s cross found McLaughlin unmarked in the area but he failed to convert.

However, Coleraine would reduce the deficit four minutes into the second-half as Ben Doherty went to ground inside the area under a challenge from Mark O’Hara. The midfielder then composed himself to confidently dispatch from 12 yards.

Just before the hour mark the hosts thought they had found a dramatic equaliser as the ball landed into the path of Gareth McConaghie who powered home but he would be denied by the lineman’s flag.

On 73 minutes, Coleraine would spurn a glorious chance to make it 2-2 as Glackin’s free-kick found Stephen Lowry who lost his marker but the ex-Linfield man blazed over from eight yards out.

However, there would be a grandstand finish in store as Coleraine were awarded a second penalty on 89 minutes. A long ball found its way to Eoin Bradley and he was fouled inside the box by Bevis Mugabi who was given a straight red card. Up-stepped Doherty who once again found the back of the net to send the tie into extra-time.

Stephen Robinson’s men would miss the best chance of the opening 15 minutes as a poor pass from Lowry allowed Motherwell substitute Chris Long to run through but he failed to hit the target.

Coleraine thought they had taken the lead on 108 minutes as the lively Glackin crossed the ball to the back post and Bradley’s strike cannoned off the crossbar, with the rebound being cleared off the line by O’Hara before McLaughlin could pounce.

The tie would be settled by a penalty shoot-out and there would be heartache for the Bannsiders as Parkhill, Kane and McConaghie would all be denied by Carson, with O’Hara, Watt and O’Donnell converting for Motherwell.