It was a hard fought game between the two sides right from the off. Coleraine Ladies had numerous chances in the opening stages and were looking likely to take the lead from a corner; however neither Shairee McVey, nor her centre-half partner Amy McAllister could convert their headers on target into goals. It was from a Coleraine corner that Ballymacash would create their first chance when their striker turned Amy McAllister on the half way line from their clearance, only for ‘keeper Emma McCauley to come out and brilliantly save her strike.

Shairee McVey then rattled the crossbar from a free-kick and the follow up from Carla Dickie was well saved. Coleraine would then be undone from a set piece when winger Kirsty Gillis was adjudged to have handled the ball two minutes from half-time. The resulting free-kick was converted into the right hand side of the net past the diving Emma McCauley.

The Ladies started the second-half of the game with the same determination as the first with Abbey Alexander and Sam Miskimmon all having more chances, this then lead to more corners and Coleraine managed to find the equaliser. Kirsty Gillis delivered the ball in and Alison Nicholl was there to convert her header high into the net on 59 minutes.

This lifted the Coleraine team and they continued to drive on and push forward, leading to yet another corner and up popped Alison Nicholl to score her second and Coleraine’s second of the game on 63 minutes. Ballymacash pushed hard to get back into the game but the Coleraine defence stood strong, winning battle after battle and giving the Bannsiders midfield a platform to play some good football, in turn setting Alicia Wilkinson off into the penalty area only to be brought down and winning a penalty for her team on the 87th minute. Abbey Alexander stepped up and converted hard and low to the goalkeeper’s left putting Coleraine 3-1 ahead.

Ballymacash replied almost immediately winning a free-kick just inside Coleraine’s half. The Ladies kept a high line for the free-kick, but after the ball ran through to the keeper, she misjudged the clearance and sliced the ball into her own net making the score 3-2. Ballymacash seen this as game on and they scored again when a long ball into the box was flicked onto the striker’s feet, with no way to turn she laid it back to the edge of the box and their midfielder fired in making it 3-3 just before the full-time whistle. Extra-time saw no further goals so the game went into spot-kicks, were Coleraine would then lose the game 6-5. The girls battled hard, played super and gave everything they had.

The Ladies would like to wish Ballymacash all the best in the final and will travel to them on Wednesday night for a league game. Coleraine Ladies would also like to thank Maurice Bradley for sponsoring the match ball and taking pictures, they would also like to thank Chris McVey for sponsoring a match ball and Aaron Dickie for sponsoring a match ball for the previous game and also for taking pictures at the match. Furthermore, we would like to place on record our thanks to our supporters who encouraged the girls not only for the semi-final, but for the entire season. Last but by no means least, our thanks goes to Denise Gourley for replenishing the first aid kit, Cheryl Alexander for updated for match reports and Alice Nicholl for washing the kit all season. 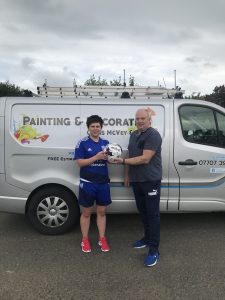 Coleraine Ladies would like to thank Chris McVey for sponsoring a match ball prior to the Division Two cup tie against Ballymacash Ladies. 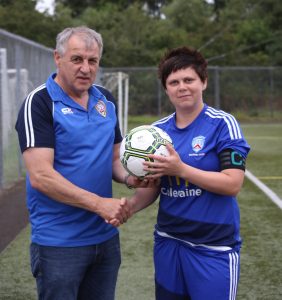 Coleraine Ladies would like to thank Maurice Bradley for sponsoring a match ball prior to the Division Two cup tie against Ballymacash Ladies.