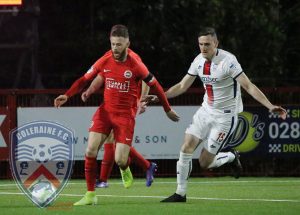 Goals from Eoin Bradley and Josh Carson helped Oran Kearney’s side to a share of the spoils in East Antrim.

The Bannsiders were down on numbers for last weekend’s clash against Larne as Lyndon Kane, Stephen Lowry and Adam Mullan all missed out through injury.

Coleraine were dealt a blow early in the game as Davy McDaid capitalised on a defensive mistake from Stephen Douglas to hand the home side the lead. The central defender tried to play out from the back, however, McDaid reacted quickest, intercepting the pass before slipping Jonathan McMurray through on goal. His attempt was saved by Chris Johns before McDaid tapped home the rebound.

The windy conditions were proving difficult for both sides as Ian Parkhill almost caught Conor Devlin out with an in-swinging free-kick, before Aaron Jarvis dinked an effort over the crossbar from the edge of the box.

Ben Doherty should have pulled the scores level before the break but his left footed attempt was expertly turned behind with a great save from Devlin in the Larne goal.

Larne never really cleared the resulting corner and it was a spell of possession inside the home side’s half that presented Coleraine their equaliser as Eoin Bradley latched onto Albert Watson’s weak header allowing the striker to slam home from a tight angle.

On the stroke of half time, the Bannsiders pulled ahead as Josh Carson bundled home Jamie Glackin’s corner at the back post. In the build up, Parkhill had a great chance to put Coleraine ahead as the ball broke kindly to him inside the box after a surging run and cross from Glackin. However, Devlin pulled off another top drawer save to keep the scores level.

At the break Oran Kearney’s side were in front and were deserving of their lead as they enjoyed the better chances despite Larne forging ahead via McDaid’s early effort.

The Bannsiders were dealt a blow at the beginning of the second half as Aaron Jarvis limped off to be replaced by James McLaughlin.

The striker almost had an immediate impact as he looked to put Coleraine further ahead only to be denied by Devlin. Jamie Glackin picked up the loose ball but his effort drifted over the crossbar.

Larne grabbed an equaliser shortly after as Mark Randall slammed home. Coleraine appealed for offside but to no avail which left the game beautifully poised for a grandstand finish. Jonathan McMurray could have given the home side the lead midway through the second half but Chris Johns was on hand to gather the ball before Aaron Canning headed wide for the visitors.

Oran Kearney’s side appealed for a penalty shortly after as the ball looked to strike the arm of a Larne defender but referee Shane Andrews waved away the appeal.

Eoin Bradley looked to have won it right at the death for the Bannsiders as he pinched the ball off Jeff Hughes before running towards goal only to be denied by Devlin who was in great form all afternoon.