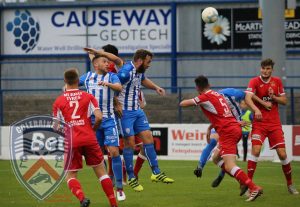 COLERAINE safely progressed to the third round of the BetMcLean.com League Cup after a routine 4-0 victory over Annagh United at The Showgrounds…

Ben Doherty’s strike combined with a hat-trick from Ian Parkhill helped the Bannsiders to a comfortable win over their Premier Intermediate League opponents.

The Bannsiders enjoyed the early possession and almost made it count as Ian Parkhill and Emmett McGuckin looked to work Hughes in the Annagh United goal early on. The visitors had a great chance on 11 minutes as Nedas Maciulatis hared through on goal but veteran defender Stephen Douglas was on hand to make a timely block.

Stephen O’Donnell almost doubled his season goal scoring tally on 16 minutes as he pounced on a loose ball inside the box from Jamie Glackin’s corner, however, he was left frustrated as his driven shot was cleared off the line.

The Bannsiders were awarded a penalty on 31 minutes as Emmett McGuckin was fouled just inside the area. Despite the protests from Annagh United, referee Ken Gibbons awarded the spot kick after a lengthy discussion with his linesman. Ben Doherty placed the ball on the spot before slamming the ball home from 12 yards to hand the Stripes the advantage.

Annagh looked for a response and almost got it on 34 minutes as the lively Maciultas fired over he crossbar when well-placed on the edge of the area.

Ben Doherty thundered an effort wide before the interval but this had no bearing on the score line at half-time as the Bannsiders went in a goal to the good at the break.

Coleraine continued to mount the pressure after the break and doubled their lead on the hour mark. Some neat play from the influential Ben Doherty allowed Ian Parkhill to race through on goal, beating the offside trap, keeping his composure in-front of goal to slam the ball through the advancing Annagh goalkeeper’s legs.

The visitors almost pulled a goal back moments later but Chris Johns was on-hand to make a double save denying ex-Portadown midfielder Sean Mackle, before Ruairi McDonald flashed an effort narrowly wide for Ciaran McGurgan’s side.

Oran Kearney obviously had one eye on Friday night’s league clash with Glenavon as he introduced Alexander Gawne and Dean Shiels midway through the second half. Gawne had an immediate impact as he set up Coleraine’s third on 70 minutes. The striker picked the ball up in midfield before surging towards goal and he slipped Ian Parkhill through on goal and the Ballymoney man made no mistake with the finish to grab his second goal of the night.

The rout was complete on 75 minutes as Parkhill completed his hat-trick, bagging Coleraine’s fourth goal of the evening. A defence splitting pass by Stephen Douglas found Parkhill in acres of space out wide and the striker clinched his third by dashing towards goal and smashing his effort home.