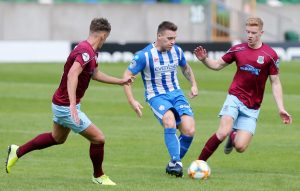 In what was the first fixture to be played since the coronavirus pandemic gripped the country, the Bannsiders started on the front foot and had the ball in the net after eight minutes as Stephen O’Donnell headed home from Ben Doherty’s free-kick, but the captain would be denied by the linesman’s flag.

On 14 minutes, Oran Kearney’s men would threaten again as Jamie Glackin’s corner kick to the back post found an unmarked Eoin Bradley at the back post but he couldn’t steer his header past Ross Glendinning. Two minutes later, Glackin would provide the danger once again as he cut in from the byline and crossed for Ben Doherty but the midfielder just missed a vital touch onto the ball.

The Sky Blues’ two meaningful chances landed at the feet of Tony Kane but both of his free-kicks failed to trouble Chris Johns in the Coleraine goal. However, a free-kick at the other end would break the deadlock as Bradley curled a delightful set piece beyond Glendinning on the stroke of half-time.

The Stripes made a change at half-time with Aaron Canning replacing Adam Mullan in the heart of the back four and Coleraine should have doubled their advantage on 57 minutes as Josh Carson crossed the ball for Doherty who failed to convert from close range.

In a second-half that was disrupted by substitutions and knocks, it wasn’t until 80 minutes for the next opportunity to arrive as Bradley sent another free-kick inches wide of the near post. Further changes would occur as Ian Parkhill replaced Aaron Jarvis and Emmett McGuckin was brought on for Aaron Traynor.

However, just when it looked like Coleraine would reach their third Irish Cup final in four years, they would be a victim of a suckerpunch on 94 minutes as Ballymena substitutes all combined to help Kenny Kane tap home from close range to send the match into extra-time.

With tired legs on show, it took until 99 minutes for the first chance of extra-time to arrive as McLaughlin went on a lung busting run from deep but he couldn’t drag his effort on target. Moments later, Lowry would play a sublime ball through to Bradley and his cross was met by McGuckin who failed to clear the crossbar. There would be frustration for the Bannsiders as McLaughlin had the ball in the net but he was wrongly flagged for offside. The second-half of extra-time would prove to be a cagey affair as the fixture would be decided by penalties.

The first two spot kicks would be missed by United’s Jim Ervin and Stephen Lowry for Coleraine, before Andy McGrory found the bottom corner for the Sky Blues. That advantage was heightened when Bradley missed for the Bannsiders and James Knowles dispatched his spot kick for Ballymena.

Coleraine would finally register their account in the shoot-out through McLaughlin but United would put one foot in the final through Stephen McCullough’s confident spot kick. Up-stepped Doherty who had to score for the Stripes but he failed to be successful from 12 yards in a frustrating day for Oran Kearney’s troops.