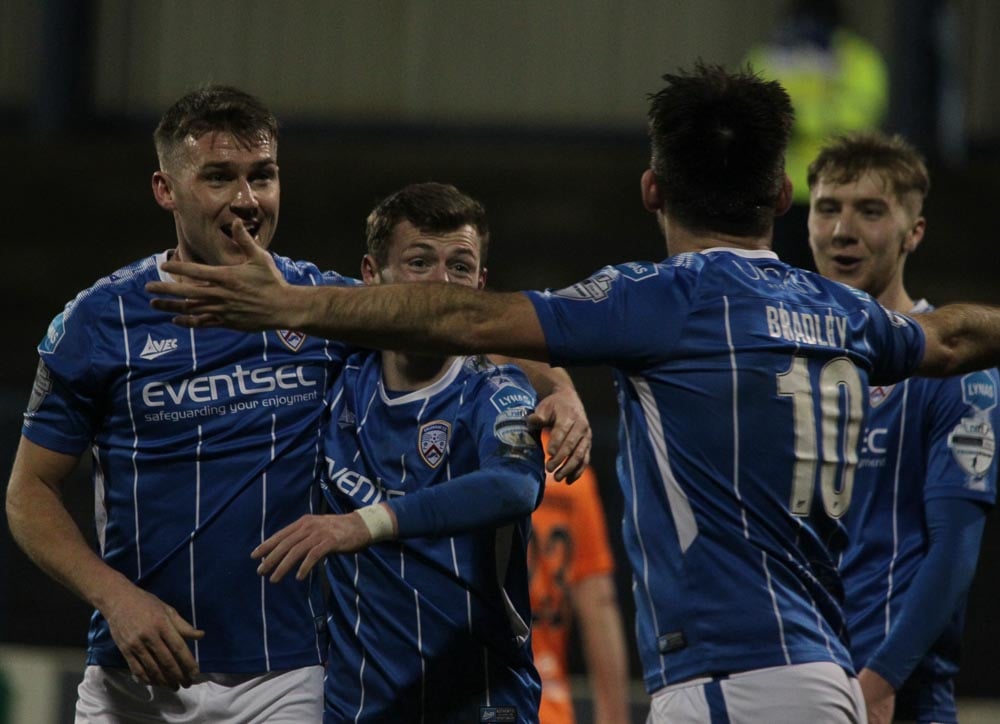 The Bannsiders, who welcomed back Aaron Canning into the fold, made it three consecutive victories in the league as they saw off a stubborn Carrick Rangers.

They continued where they left off before Christmas by putting the basement boys to the sword to pocket another three valuable points.

It was the visitors, however, who started brightly and it took a super stop from Gareth Deane to deny them an early opener.

The ‘keeper reacted well to tip Johnny Frazer’s clever ninth minute flick over the crossbar after he got on the end of Lee Chapman’s cross, before it took Lyndon Kane’s full recovery powers to deny the sharp Fraser another opportunity after a quarter of an hour.

Coleraine were lethargic throughout the first half and it was almost half an hour before they caused Carrick a problem, but Ian Parkhill’s attempted through ball just eluded Stephen O’Donnell. Moments later, Aaron Traynor then advanced and sent a teasing cross into the box after 34 minutes but there were no takers.

Carrick – on the back of three defeats on the spin including a 6-0 defeat on their last outing – had a great chance to go ahead sixty seconds later when they were awarded a penalty after Kane was penalised for a push on Jordan Gibson.

But Deane came to the rescue again with another stunning stop to push Caolan Loughran’s spot kick past the post.

Manager Oran Kearney was quick to address the issue and made a double substitution at the start of the second half, with Eoin Bradley and Stewart Nixon replacing McLaughlin and Parkhill.

The response was instant with the home side looking more purposeful and dangerous, and they made the breakthrough after referee Ross Dunlop awarded his second penalty of the afternoon.

This time Mark Surgenor was penalised for a high challenge on Bradley and Ben Doherty slotted his 54th minute penalty past Aaron Hogg for his tenth goal of the season. Unfortunately, Doherty’s joy was to turn to despair 20 minutes later, however, as he was stretchered off with a suspected shoulder injury.

The Bannsiders went close to doubling their advantage on the hour mark but Bradley drilled an effort narrowly wide. Despite being in top for most of the second half, Coleraine had to survive a couple of late scares.

Michael Smith was played in by Corey McMullan but his shot lacked power and then Deane got down well to turn Lloyd Anderson’s snap shot past the post. Man of the match Deane came to the rescue again on 85 minutes as he thwarted Fraser with another fingertip save.

And it proved crucial as Coleraine sealed the points sixty seconds later.

Jamie Glackin was the provider with a perfect cross and former Taylor’s Avenue player Nixon planted a header beyond Hogg.

So a welcome start to 2021 and now attention turns to next weekend’s eagerly awaited clash with in form Ballymena.