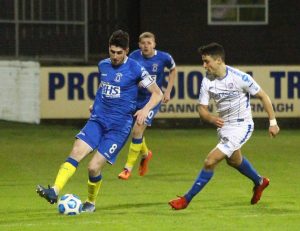 Coleraine’s search for a win continues after a 2-0 defeat by Dungannon Swifts.

The hosts would threaten on 13 minutes as Michael Carvill’s inswinging free-kick drifted wide of the far post. Two minutes later, the same player would make the breakthrough as the former Linfield man swivelled and turned at the edge of the box before finding the bottom corner.

In a lacklustre first-half that was disrupted with a heavy wind, the best chance for Coleraine landed via an Eoin Bradley free-kick but the striker was unable to steer his effort on target.

The Bannsiders made a better start to the second-half and threatened immediately after the restart as Jamie Glackin had an effort cleared off the line by an alert Callum Byers. From a corner kick, the ball would land at the feet of Aaron Jarvis and his strike produced a smart save from Sam Johnston.

The chances kept on coming as James McLaughlin failed to find the target from distance with Glackin heading wide from Aaron Traynor’s delivery on the hour mark. There would be further frustration on 74 minutes as Ben Doherty’s free-kick met the head of substitute Stewart Nixon but he couldn’t profit from close range.

Those misses would be punished on 79 minutes as the hosts doubled their lead. A mis-placed pass was seized upon by Daniel Hughes and after his strike flashed off the crossbar, Shane McGinty delivered the loose ball to the back post for Carvill to then lay off into the path of Rhyss Campbell who made no mistake in smashing his shot home.