colerainefc.com’s Johnny McNabb caught up Stephen Lowry to discuss his early career, the move to Linfield and life both on and off the pitch…

Q1. Talk us through your playing days as a youngster? Were you always a midfielder?

When I was at Primary School I was a striker – I scored a lot of goals for the school and Newtowne Youth FC, who had some great players who have came through the ranks over the years, many of which went on to play in England.

I moved to midfield around my early teens, usually out the right wing – I was small and lightweight – struggled a bit around my teenage years in terms of not making Milk Cup teams and Foyle Cup teams which disappointed me as a young player.

Q2. Made your Irish League debut with Limavady United? Who was the manager? Do you remember much about it?

Paul Kee was the manager at the time and he had a lot of experience in the squad, players like Stephen Parkhouse, Tony Shields and Ryan Coyle who were great to be around.

I’m nearly sure my debut was off the bench away to Cliftonville and then I started away to Lisburn Distillery and we won 1-0.

Q3. Signed for Ballymena United in January 2007- do you think that move may have happened too early in your career?

I’m not sure it happened too early – it was more just a move that didn’t work out how I would have liked.

I had one really good run in the team, where we went on a long unbeaten run for 15-16 games and I played regularly.

At the time they had a lot of experienced players and they always seemed to get back into the team.

I enjoyed working with Tommy Wright and he moved on. Roy Walker took the job and I wasn’t a part of his plans at the time so I didn’t lose too much sleep about it, I moved on and went back down to Limavady before moving to Coleraine.

Q4. Returned to Limavady but then made the switch to Coleraine under Davy Platt…there was a race against time to get that move completed?

I was having a good season for Limavady and really enjoying it. I thought I was going to go to Coleraine at the end of the season and then it happened quick on the last day of the window.

We played a match away to Albert Foundry in one of the cup competitions and remember speaking to Oran after and he encouraged me to go for it.

Limavady at that time had a good side with young players like Ciaran Clarke and Shane Jennings – then the likes of Davy Patton and Lee Patrick.

I remember having to rush down the road and get everything signed before the deadline so it all happened pretty fast and that was that.

Q5. How did you find working under Davy? Did you maybe not play as much football as you would have liked?

I would say looking back at that time at Coleraine now, it was much like my Ballymena career – in and out of the team with some good performances and no consistency.

I put that down to myself and not the manager as I got on well with Davy and his assistant Aidy – football is just funny sometimes the way it works out.

Coleraine had a string of disappointing results and there were a lot of big characters in the changing room at the time – it was difficult.

It’s another reason that we as players and a club should enjoy the fact the team are doing so well at the minute, winning trophies and challenging for league titles.

Q6. It is fair to say when Oran Kearney came in as manager in February 2011, your game really took off?

I had worked with Oran at Limavady and developed a good relationship with him – simply through him putting some belief in me and my performances on the pitch.

When he came to Coleraine he worked the exact same way and I’ll never forget his first training session on the Monday night before we went to beat Ballymena 1-0 away on the Tuesday.

Since then I played regular and added consistency to my game which is so important if you want to have a good career in the Irish League. 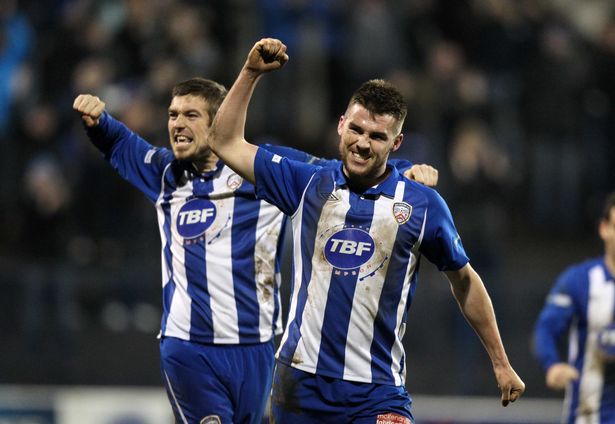 Q7. Turned down the advances of Linfield in 2013…talk us through that?

I remember me and my agent (dad) going to meet David Jeffrey and Brian McLaughlin in his office at the old Windsor Park.

At the time I was unsure on what I wanted to do. I left the room without signing which told me it just didn’t feel right and when I spoke to Oran on the phone when driving home I just went with my gut and decided to stay.

I’m nearly sure it was the time when Cliftonville won consecutive league titles.

Q8. Finally joined the Blues a year later…why did it feel right that time round? You enjoyed plenty of highs at Windsor Park?

I remember that I pushed to actually speak to Linfield again. Warren Feeney was the manager and we had an average season at Coleraine – I just felt that I had a better chance of winning trophies at Linfield at that time and decided that I was going to give it a go.

My dad was going through his operation that summer as well so we had a lot going on as a family.

In regards to football, I just thought it was time for a change and don’t regret my decision. Again, Oran and Colin were supportive to me leaving.

I enjoyed plenty of highs and lows at Linfield – it’s a big club and challenge which I enjoyed. I’m delighted now to be back at Coleraine and pushing Linfield and the other clubs at the top of the table.

Q9. After success at Linfield, why did you make the move back to Coleraine in the summer of 2018? Was Oran Kearney’s departure to St Mirren a few months later a massive disappointment?

My contract was up and Linfield had offered me a new two-year deal.

Other clubs were interested but Coleraine were flying and doing really well. I spoke to Oran and was keen to get back but it was also a big decision to leave Linfield as I enjoyed it a lot.

In the end having a family, living in Limavady, working with Oran and the fact Coleraine were competing for trophies regularly was the reason for my move.

I was really disappointed Oran left but nothing can surprise you too much in football. Oran fully deserved his chance in full-time management.

I was just a bit gutted as he was a big influence in me signing again.

Q10. What was it like winning your first senior trophy with Coleraine back in February? Do you think your game has evolved in your latter years?

It was fantastic and great to get over the line. Trophies are hard to come by and some great players have played for Coleraine and never won anything so it was nice to get a trophy in the bag, but I want a few more.

I would say my game is changing slightly, but I still like to do a bit of everything as a midfielder.

I have tended to sit a bit deeper but I think this due to the way we play with lots of attack minded forward players in wide and forward positions it’s important to have that balance in the team and I don’t mind sitting back as long as we win.

Our stats are monitored regularly and I’m covering plenty of ground, maybe just the top speed has dropped a bit!

Q11. Local football has been halted due to the coronavirus and Coleraine have a lot to play for…what would your ideal scenario be once it is safe to return?

Obviously the health situation is more important than anything and it’s out of our control.

From a football perspective only, in an ideal scenario we find a way to complete the season as we have worked so hard to put ourselves in this position, albeit it might take a few months.

As players we will look after ourselves and do things right and wait and see what happens.

Q12. Talk us through your personal situation…you’re married with two children? Is it hard to balance family life with football?

I’ll be married five years in May to Camilla and have two beautiful girls, Eve (4) and Allie (5 months).

Life is busy with family, work and football but I love my life and have a nice balance.

Football is so enjoyable at the minute – well, before the virus hit – as we have been in great form and have a great changing room which makes Tuesday and Thursday’s enjoyable.

Home life is busy with two young children and everything you do is for them, but I have a very supportive wife who makes sure I’m well looked after. 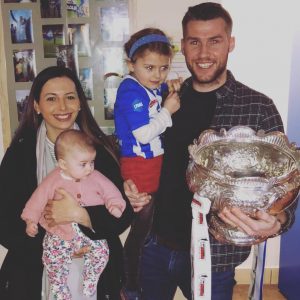 Q13. Your dad Ken had a health scare a few years ago…must have been a worrying time for the family?

Yes, my dad had a rare form of appendix cancer which required “the mother of all surgeries” – that’s the term given to the particular type that he needed.

It was a tough time from the diagnosis stage to the surgery, chemotherapy and recovery but he lives a great life now and is in good health – so hopefully that can continue.

The football keeps him going, coming to watch the Irish League every week, either at The Showgrounds or Seaview.
He has done a lot since then in terms of fundraising, volunteering and passing down his knowledge of refereeing to aspiring refs.

Q14. What’s it like playing against Philip and do you ever think you will play alongside your brother?

I don’t mind playing against Phil and in run of the mill league games I don’t even think about it, we just get wired in and get the game done.

Bigger games – such as the recent League Cup final or last year’s Irish Cup semi-final – is much tougher as we both know there has to be a loser which is not nice.

I would love to play with him so, hopefully, that can happen in the future, but time is running out and I can safely say that I won’t be signing for Crusaders.

Q15. If there’s one side of Philip’s game you would take from him what would it be?

I would say his knack of scoring goals. Scoring a goal is the best feeling in football and Philip always seems to pop up with goals.

He’s having another great season on the goal scoring front this year.