About Nedas:
Nedas joined the Bannsiders in August 2019 after impressing against the club during a BetMcLean League Cup tie against Annagh United. The striker has represented Northern Ireland at under age level and was previously on the books at Portadown and Dundalk. He marked his debut by scoring a fantastic solo effort against Glenavon – just three days after completing a move to The Showgrounds. His pace and eye for goals means he will a valuable asset for Oran Kearney’s side. 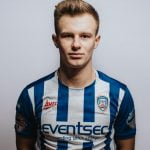