COLERAINE take part in the inaugural edition of the Europa Conference League as they face Bosnian side FK Velez Mostar in the first leg this evening (KO 7:30pm)…

Coleraine will compete in Europe for the fourth time in five seasons this evening as they face FK Velez Mostar in Sarajevo. The Bannsiders arrived in Bosnia yesterday afternoon and trained at the Grbavica Stadium last night.

The hosts will be playing in European competition for the first time in 33 years and they are expected to bring 5,000 fans to the ground. They are managed by Feda Dudic and finished third in last season’s top flight.

The Bannsiders had a memorable European run last year as they first defeated La Fiorita in the preliminary round of the Europa League. With the game looking destined to go to extra-time, Coleraine would secure their passage through to the next round as James McLaughlin controlled the ball and rifled home a winner.

That set-up a meeting with Slovenian giants NK Maribor who had previous European experience against the likes of Celtic, Rangers, Sevilla and Schalke. Despite going into the game as underdogs, the Stripes took a second half lead as McLaughlin would once again make his mark in Europe, before the hosts found a quick fire equaliser. The single leg clash would end up in a penalty shoot-out with Coleraine being successful with all five spot kicks to make it a fairytale evening in Lower Styria.

The second qualifying round would prove to be an all British affair as Coleraine and Motherwell were drawn together at The Showgrounds. The Scottish side would make a blistering start as they led 2-0 at half-time but back came Coleraine to take the game to extra-time as Ben Doherty twice blasted home from the spot. Once again, the Bannsiders would be involved in a penalty shoot out but they failed to beat Trevor Carson with all three spot kicks as Motherwell progressed.

“We are delighted to be here and we are looking forward to the game,” Kearney said.

“Like every team who qualifies for Europe, the reward is the adventure of going to countries and facing new teams.

“We, like everybody else, had a very tough season to get to this point and we are now looking forward to the game.

“The objective is to try and get through to the next match and we had a brilliant experience in the Europa League last year with some excellent memories.

“As a group and individuals, we are keen to do the same again.”

Due to regulations imposed by UEFA, no away supporters will be allowed to enter the stadium.

However, the match will be streamed live via the 247.tv platform HERE

A full list of stream instructions can be read HERE 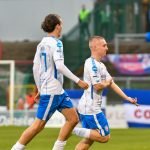