IT’S hard to believe, but one of the best producers of talent for Coleraine FC is a youth club based in – Ballymena!

Carniny Amateur and Youth FC is the club in question, with three graduates of the club currently plying their trade with the Bannsiders.

Josh Carson, Stewart Nixon and Matthew Shevlin all learned the game at Carniny before eventually finding their way to Ballycastle Road.

Arguably, Josh has been the most successful as he remains the only Carniny player to have won a senior international cap for Northern Ireland.

Josh’s father, Glynn, was a friend of Carniny coach Billy O’Flaherty who encouraged him to bring his son along to the club.

The young Josh spent a few seasons with Carniny, while also playing for St Andrew’s in Belfast, which was permitted at that time.

Whilst at Carniny, Josh was coached by Scotsman Tommy Stewart and Robin Parke, as well as O’Flaherty. 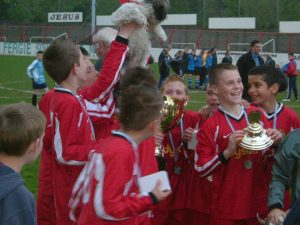 And he enjoyed a very successful time there, helping Carniny to win the league and a number of cup competitions.

A particularly memorable occasion was the Pepsi Invitational Cup at Windsor Park.

Not only did Carniny win the tournament, but they remained undefeated and didn’t concede a goal against some of the best youth teams and Irish League Academies in the country!

“As a youth player Josh was a good trainer, had a good touch with quick feet, was sensible about his diet and was well behaved and well mannered,” remembers coach Tommy Stewart.

“Without doubt, his father was a major influence on him and everyone had a good word for him.”

It was no surprise to anyone then that Josh attracted the attentions of cross-channel clubs and soon he was off to Ipswich Town, moving on to York City before returning home to Linfield for a year and then Coleraine.

Along the way, he won four Northern Ireland caps.

Despite having been away from the club for some time, Carniny club secretary Billy O’Flaherty says Josh frequently attends club functions and has always been generous with gifts for them.

“We are always proud to call Josh one of our own,” says Billy.

Stewart Nixon is another ex-Carniny FC player impressing in the Irish Premier League with Coleraine.

He kicked off his career under the coaching of Cliffy Adams at Carniny Youth, who he joined from Ballymena Youth Academy when he was 11.

His memories include, during an average season for the club, defeating a much fancied Linfield Youth 2-1 with goals from Conal Lemon and Lee Scroggie and an ‘amazing’ Foyle Cup tournament.

That was despite Stewart only playing in the opening game – he fractured his ankle in the second.

The Cliffy/Stewart partnership continued, meanwhile, and the former persuaded the striker to join him at Ballymena United, where he played for the Reserves, before making his way on to the first team at the Showgrounds.

Nixon followed Adams when he took over at Wakehurst FC and they linked up again when Adams moved on to Ballyclare Comrades. It was while at Dixon Park that Nixon won a Junior International cap.

The relationship continued at Carrick Rangers where Stewert really started to make a name for himself and it was no surprise when Irish Premier League side Coleraine came calling.

Carniny secretary Billy O’Flaherty says Nixon never lets his achievements go to his head and always makes himself available to help out when he can.

The third Carniny graduate is striker Matthew Shevlin, who joined Coleraine at the beginning of the January transfer window.

Matthew was in a class of his own during his time with Carniny – finishing top goal scorer every season he was there. 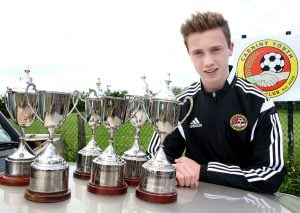 “This attracted the interest of Ballymena United Under-19s,” recalls Matthew.

“I went there and played about 10 games and scored in nearly every game.  I was moved up to the Reserves where I also scored a lot.

Matthew went on to make his first team debut for Ballymena United – getting on the scoresheet – becoming  the youngest ever player, at just 15, to score for the senior side.

“From signing in the summer for United Under-19’s, I made my debut in the Irish League the following November,” adds the 22-year-old, who will wear number  26 shirt at Coleraine this season.

“I scored on my debut with my first touch making me Ballymena United’s youngest ever goalscorer.”

Matthew played over 100 games for Ballymena United before moving to Linfield where he played 21 games.

“It was difficult to get game time because of the quality of their players,” admits Matthew.

“But I learned a lot in my time there which will help me in the rest of my career hopefully.”

The young striker says that when the opportunity came to make the move to Coleraine he couldn’t turn it down.

“I’m really looking forward to helping them the rest of this season and hopefully scoring some goals along the way,” he said.

Matthew said playing under Jimmy in the Foyle Cup was great craic while he also retains good memories of playing in the SuperCupNI where he was part of the first county team to win the trophy.

Matthew scored five goals – including two in the semi final – to win the Player of the Tournament award to add to his NI underage caps.

Carniny Amateur and YFC official Billy O’Flaherty said all connected to their set-up wish Matthew every success with his new club.

“I would have to say it was a pleasure having Matthew Shevlin as a member of our club,” said Billy.

“During his time at Carniny he was always a committed team player, a loyal club member and one of the most skilful players I have ever had the pleasure of working with,” he added.