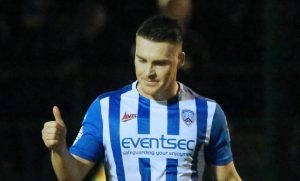 Josh Carson would be on the scoresheet for the first time this season at Wilgar Park.

Bannsiders boss Oran Kearney made four changes to the starting line-up as Gareth McConaghie returned to the back four, with Ian Parkhill in midfield and James McLaughlin partnering Emmett McGuckin in attack.

Coleraine played up the slope in the opening 45 minutes and made the breakthrough in fine style on seven minutes. A fantastic touch by McLaughlin picked out the onrushing Doherty and the midfielder’s effort sailed over Jonathan Sergeant and into the net.

However, despite losing an early goal, Dundela would threaten themselves as Daniel Burns curled a free-kick over the crossbar, before Owain Beggs’ powerful run and effort failed to trouble Chris Johns in goal.

On 20 minutes, the Stripes would double their lead as Doherty made a surging run forward from midfield and latched onto a through ball. The ex-Derry City ace hit a low, powerful effort on goal that left Sergeant with no chance.

Coleraine almost grabbed a third eight minutes later as the Bannsiders retrieved possession inside the Dundela half and Josh Carson’s strike cannoned off the crossbar. Minutes later, a clever header by McLaughlin found McGuckin inside the area, but the striker could only steer wide.

On 38 minutes, Coleraine were presented with the perfect opportunity to extend their lead as Daniel Burns fouled Parkhill inside the box. The responsibility was given to Doherty but his spot-kick was saved by Sergeant.

Remarkably, two minutes later, referee Jamie Robinson would point to the spot for a second time as Lyndon Kane was brought down by Sergeant. Despite missing a penalty two minutes previous, Doherty steadied himself to score his first hat-trick in senior football and 12th goal of the season.

The Bluefin Sport Championship side made a strong start to the second-half and grabbed a deserved goal on 60 minutes as Burns’ cross from the left was found Beggs who couldn’t miss from close range. At the other end, Dundela had Sergeant to thank as the stopper made a smart stop to deny Aaron Jarvis from close range.

On 69 minutes, Dundela spurned a glorious opportunity to reduce the arrears to a single goal as Beggs picked out substitute Ross Holden, but the former Crusaders midfielder failed to hit the target from the edge of the box.

The Duns would rue that chance a minute later as Coleraine extended their lead once again as a long ball caused confusion in the home defence. That mix-up was pounced upon by Alexander Gawne who had the simple task of slotting into an open net for his first goal of the season.

There would be further gloss added to the scoreline on 85 minutes as Kane and Jamie Glackin linked-up to to release Josh Carson inside the area. The Bannsiders number 11 took a neat first touch before slotting into the bottom corner to get off the mark for the campaign.