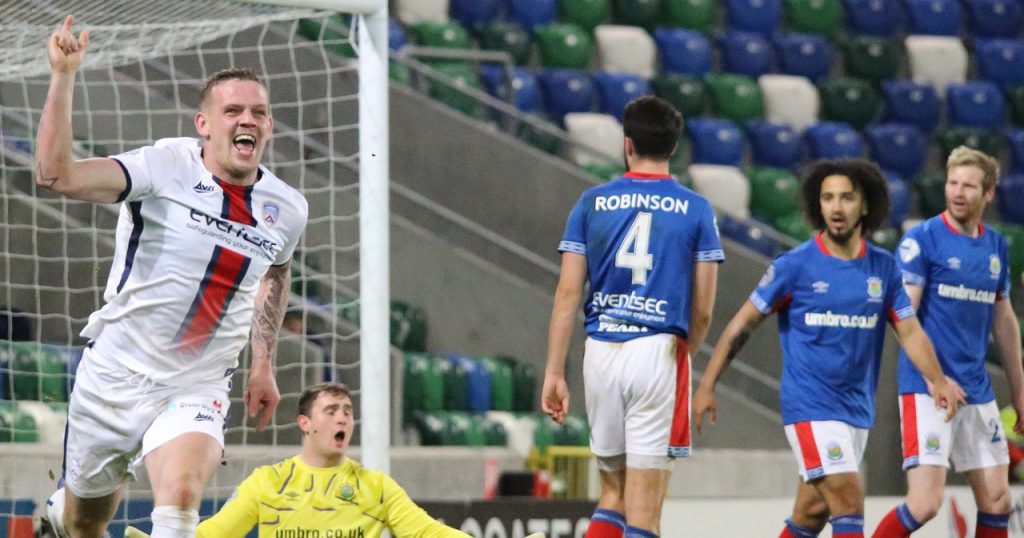 In a tale of two halves, goals from Aaron Canning, Ben Doherty and Aaron Jarvis helped the Bannsiders book their place in the showpiece final in two months’ time.

It proved to be a rather cagey opening quarter at Windsor Park with both sides cancelling each other out in possession in the opening exchanges Linfield captain Jamie Mulgrew had the opening shot of the match in the fifteenth minute but his shot from outside the area drifted over the crossbar.

It would be a further 10 minutes before the next shot on goal and it also fell to the home side with Matthew Clarke trying his luck but to no avail. Moments later, Stephen Fallon looked to give Linfield the lead on 32 minutes as he picked up the ball from Shayne Lavery outside the area but his right-footed shot sailed wide.

Lyndon Kane gifted Linfield a glorious opportunity to take the lead on 39 minutes. The defender’s weak back pass was intercepted by marksman Shayne Lavery but he was unable to beat Chris Johns who stood firm in the Coleraine goal. A few minutes later, Kirk Millar tried his luck from distance but his shot drifted beyond the upright.

At the half-time interval, the scores were level although Linfield shaded the better chances in the first half.

Oran Kearney’s words of wisdom seemed to spark the Bannsiders into life after the restart. Ben Doherty had a great chance in the 49th minute but his shot to the back post took a deflection off his team mate Jamie Glackin before going behind.

Midfielder Aaron Jarvis had a golden opportunity from a back post header on 52 minutes but his effort from Eoin Bradley’s cross was saved by Rohan Ferguson. At the other end, Joel Cooper called Chris Johns into action to deny a curling effort at goal before Stephen Fallon fired wide for David Healy’s side.

Shortly after the hour mark, Coleraine grabbed the lead in dramatic circumstances as Aaron Canning popped up with a header inside the six-yard box. Initially, Jamie Glackin won a free-kick and the ball into the box caused problems as Linfield failed to clear but Canning kept his composure, capitalising to nod home.

Coleraine were dealt a blow midway through the second half as Lyndon Kane had to go off with a shoulder injury following a tussle with Linfield winger Jordan Stewart.

The Bannsiders were in dreamland on 79 minutes as midfielder Ben Doherty extended Coleraine’s lead. A long ball upfield from Aaron Canning found Doherty in acres of space and he drove towards goal before his shot took a deflection and into the net.

Things went from bad to worse for Linfield as Aaron Jarvis secured a third for the Bannsiders with a spectacular header at the back post from Ben Doherty’s corner to round off a perfect evening for the visitors.