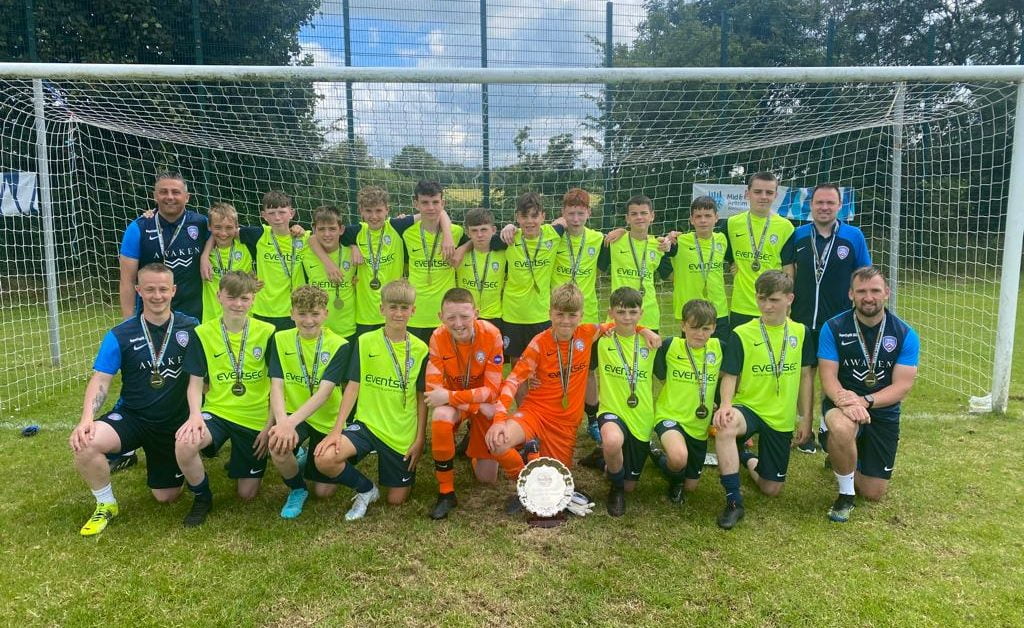 The final day of the SuperCupNI for our minors today saw them on their travels to Clough to face Stella Maris in the final of the Salver Shield.

The young Bannsiders started the game very well and it wasn’t long before they got rewarded when the ball broke to Diaz McMullan 20 yards from goal and with a great turn to beat his marker smashed the ball into the corner of the net to give the Coleraine boys the early lead.

Five minutes later the lead was doubled when Fraser Forsythe beat the offside trap and placed the ball past the oncoming ‘keeper with a great finish.

Stella Maris now 2-0 down started to come back into the game and caught the young Bannsiders out and pulled a goal back to make it 2-1.

With both teams now trying to get a foot hold on the game it was the Dublin side that had the best chance to do so when they were awarded a penalty in the closing stages of the first-half but the Coleraine ‘keeper Charlie Barnett pulled off a great save to ensure his side went into the break with the lead.

The young Bannsiders came out fighting in the second half and a great curled shot from Emmett Morrison just inside the box gave the boys a bit more breathing room.

Stella Maris never gave up and started pushing a few more forward but got caught out when the Coleraine striker John Strunks showed his blistering pace and broke away from the defence to slot the ball into the bottom corner of the net with a well placed finish.

Coleraine now playing with a bit more freedom found themselves 5-1 up when a failed clearance fell to George Eaton 25 yards from goal which he met with a fantastic half volley strike into the top corner of the net.

Today saw Coleraine 2008s play their final game of this year’s SuperCup NI in the Bowl final against Greenisland Boys FC. Recent games between these two sides have been decide by the odd goal.

Coleraine had a poor first half which saw them finish the half 3-0 down. A spirited second half saw Coleraine pull back two goals to set up a nail biting finish. Unfortunately, despite continued pressure the young Bannsiders were unable to find an equaliser and Greenisland held on to win the bowl.

Speaking after the game, Stevie McCann commented: “It was a very poor first half performance and wasn’t helped when Charlie Patton came off injured which unsettled us at the back.

“David Platt and I spoke to the boys at half time about did they want that performance in the first half to define their SuperCup or did they want to show everyone how they could play.

“They showed a spirited second half and Greenisland were hanging on at the end but they deserved to win it in the end. We now look forward to next season’s NIBFA. It was a great experience for the boys and one no doubt they will look back on with fond memories in years to come.”

It would be a tough afternoon for County Londonderry as their teams lost in both the Junior and Premier sections.