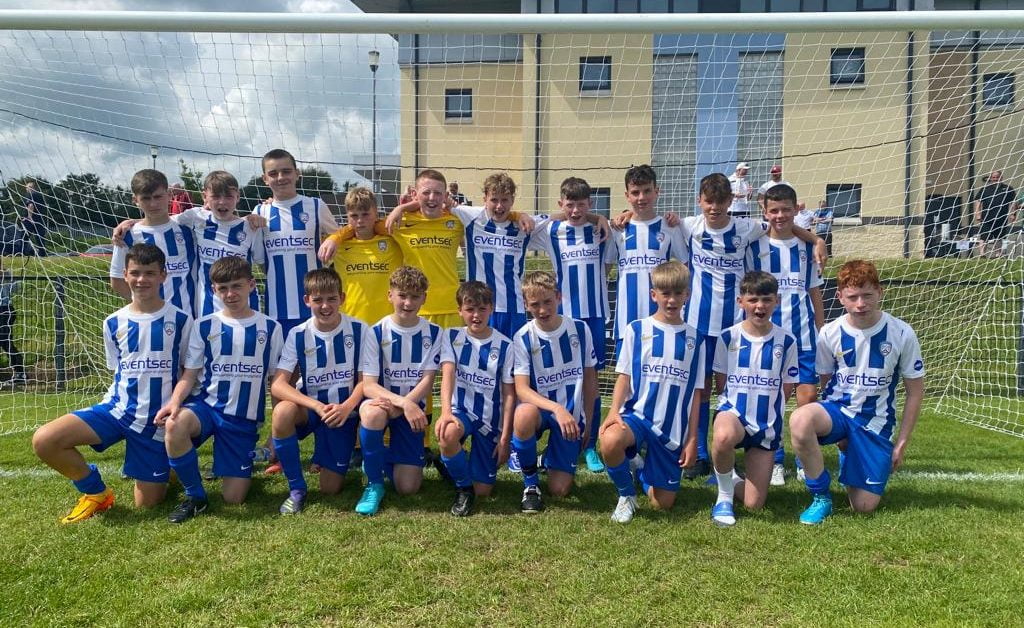 The young Bannsiders faced Loughgall today at the Rope Walk in the semi-final of Salver tournament.

The conditions were perfect and so was the football from the Coleraine boys and it wasn’t long before they broke the deadlock when John Strunks brushed past the defence and lofted the ball over the ‘keeper.

Coleraine now with their heads up started playing some great free flowing football and it wasn’t long before the ball found the back of the net again when it fell to Jack Hull which he smashed Into the top corner from 35 yards out.

Five minutes later a failed clearance from Loughgall found Ethan Deane 25 yards from goal and he made no mistake curling the ball into the top corner to see the Bannsiders go in three goals to the good at half-time.

The second-half started just as bright for the Coleraine lads when the ball fell to Oliver Bucklee 20 yards from goal who smashed the ball past the keeper.

Coleraine now four goals up started to keep the ball well and control the game then a lovely through ball from John Strunks found Lucas McClements who made no mistake and placed the ball into the roof of the net.

Loughgall pulled one back with a great finish form the edge of the box but Coleraine went again and after a goal mouth scramble Fraser Forsythe slotted the ball home to see the Coleraine boys progress into the final tomorrow.

Well done boys and good luck in your final.

Coleraine started brightly and two quick goals from Logan McKeeman and Conor Love saw them go in at half-time with the lead.

The Stripes continued to apply pressure in the second-half and extended their lead further with two more goals from Logan McKeeman and Chris McDowell.

Ballymena managed to pull one back with a header from a corner but Coleraine immediately replied when Chris McDowell calmly slotted home his second to make it 5-1.

Despite continued pressure, the young Bannsiders couldn’t add to the score line but were delighted to be heading to the final tomorrow.

Speaking after the game, Stevie McCann said: “I was delighted for the boys. They have worked hard all week and not got their just rewards but today they got what they deserved from the game.

“We managed to get everyone of the players game time today which was great. I have to mention Shane Kealey who unfortunately suffered a fracture to his wrist on Wednesday during the game and we wish him a speedy recovery.”

It would be a tough afternoon for County Londonderry as their teams lost in both the Junior and Premier sections.