Shankly would burst onto the scene at Carlisle United before joining Preston North End in 1933 at just twenty-years-old. He would spend the rest of his career at Deepdale, helping North End win the FA Cup in 1938. His playing career was interrupted by his service in the Royal Air Force during the Second World War.

He became a manager after he retired from playing in 1949, returning to Carlisle United. He later managed Grimsby Town, Workington and Huddersfield Town before moving to become Liverpool manager in December 1959. Shankly took charge of Liverpool when they were in the Second Division and rebuilt the team into a major force in English and European football. He led Liverpool to the Second Division Championship to gain promotion to the top-flight First Division in 1962, before going on to win three First Division Championships, two FA Cups, four Charity Shields and one UEFA Cup.

Bill Shankly was a tremendous competitor as a player making his name at second division Preston North End after arriving from Carlisle United, one division below, in 1933 at twenty years of age. He eventually made his full debut for them on 9 December 1933 against Hull City and quickly established himself as a regular and a crowd favourite owing to his whole-hearted attitude and commitment to the side. At the end of the season Preston had gained promotion to First Division. 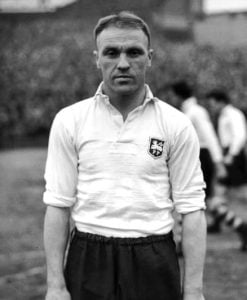 In an otherwise disappointing season, in 1936/37, Preston had the satisfaction of reaching the FA Cup final. At Wembley they came up against a strong Sunderland team who ran out 3-1 winners. The following year, Shankly scored his first league goal for Preston in a 2-2 draw against Liverpool at Anfield on 2 February 1938. North End were again to reach the Cup Final that season and this time they ran out 1-0 winners against Huddersfield. It was the pinnacle of Shankly’s playing career.

When Shankly was at the peak of his powers seven years of his career were lost to World War II. Shankly, who was in the RAF, starred for Norwich, Luton, Arsenal and Partick Thistle in the war as well as playing a single game for Liverpool in a 4-1 win over Everton at Anfield. When full League football resumed for the 1946/47 season, Preston still held his registration, and it was at Deepdale where he resumed his full professional career after hostilities had ceased. Shankly was now viewed as being part of a pre-war generation. Many clubs were throwing in youngsters in an attempt to make a fresh post-war start.

Shankly played for Scotland 12 times from 1938 to 1943 in five full and seven wartime internationals. Shankly made his international debut on 9 April 1938 against England at Wembley; Scotland winning the match 1–0 with a late goal by Tommy Walker. Nine of his Scotland appearances were against England and the others were against Northern Ireland, Wales and Hungary. He was Scotland’s captain in the wartime match against England at Hampden Park, attended by 78,000 people on 3 May 1941, but Scotland lost that game 1–3. Perhaps his most memorable international was the wartime game at Wembley on 18 April 1942 when Scotland won 5–4 and Shankly scored his only Scotland goal.

Shankly, still a hugely accomplished player, soon found himself on the fringe of things and would often find himself helping to bring on the kids in the reserves. In 1949, Shankly was Preston’s captain as the side struggled in the First Division and was eventually relegated in the spring. Before the end of the campaign, Shankly’s old club, Carlisle United offered him the chance to become their manager and he took it.

Carlisle were a struggling Third Division North side who found it hard to attract southern-based players because of their geographic remoteness. Shankly immediately turned this disadvantage on its head and turned Brunton Park into something of a fortress. He would tell his players how tired the opposition must be at having to travel up to such a remote corner of the country. Carlisle was good for Bill Shankly and he for them as when he took over the club had won 14 games in the season, finishing fifteenth, but when he left it boasted 25 wins and third place. After a squabble with the club who had reneged on a bonus promise should the team finish in the top three, Shankly resigned. 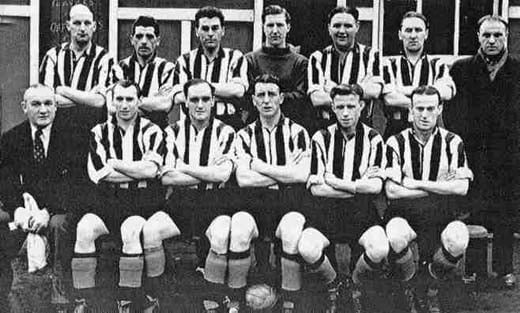 After an unsuccessful interview at Liverpool, Shankly moved to manage Grimsby Town in June 1951. He said in his autobiography that there was greater potential at Grimsby than at Carlisle. His main problems were that Grimsby had been relegated twice in recent seasons, dropping from the First to the Third Division, and some good players had been transferred before he arrived. Even so, Shankly believed he still had good players to work with and was able to buy some additional players on the transfer market for low fees. In 1951/52, Grimsby just missed promotion, despite picking up an incredible 36 points out a possible 40 in the last 20 matches. The 1952/53 season started with much optimism around the club but the players still felt the disappointment of the previous season. The team too, was an ageing one, and struggled after a bright start and the season fizzled out. Shankly was given no money to buy new players and was reluctant to blood some promising reserves because of the loyalty he felt to these older stalwarts, a fault that was to surface at Liverpool years later. Disillusioned by events, he quit in January 1954, citing a lack of ambition by the club as his main reason.

Shankly was only a few days without a job after leaving Grimsby but had undoubtedly taken a step down the football ladder by taking over as manager at Workington. The club had only been a League side for two years and forced to to apply for re-election at the end of both seasons. At the end of the 1953/54 season, Shankly had lifted them to twentieth position, six points clear of re-election. Workington were transformed, playing a delightful brand of football. Season 1954/55 saw them finish a creditable eighth in Third Division North. Shankly had recharged the batteries that had run so low after his experiences at Grimsby and he was looking to step up the managerial ladder again. When he heard his old colleague from his Preston days, Andy Beattie was in trouble at first division Huddersfield, he was only too glad to tend his resignation at Workington on 15 November 1955 to go and help him out.

Shankly became assistant manager and coached the reserves at Huddersfield but on 5 November 1956, after the club had been relegated to the Second Division, Beattie left and Shankly took over as manager. On Christmas Eve 1956, Shankly gave a full first-team debut to one of the rising stars of the club, 16-year-old Denis Law. Shankly was unable to take Huddersfield back into the top division but was making a mark for himself as a manager.

In 1959, the Scot took charge of Liverpool who were a Second Division outfit that had been starved of 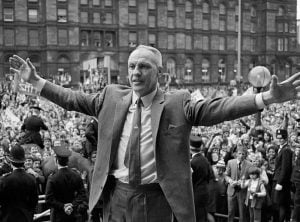 success on December 1, 1959, and set about laying the foundations that would see three First Division titles, one Division Two title, two FA Cups and one UEFA Cup claimed during his time in charge.

But it is the contributions beyond simply putting trophies in the cabinet that secured Shankly’s untouchable Anfield legacy. From founding the mythical Boot Room to revitalising the club’s training facility at Melwood – his influence remained evident in the unforgettable period of success that followed under Bob Paisley, Joe Fagan and Kenny Dalglish.

Shankly was 60 when Liverpool won the 1974 FA Cup final and said in his autobiography that, on returning to the dressing room at the end of the match, he felt tired from all the years. His mind was made up and he knew he was going to retire. His wife, Nessie, had asked him to retire a year earlier but he decided that was not the right time. Tommy Smith said that Shankly’s feelings for Nessie were undoubtedly a major reason for his decision. In 1974, he decided that he could leave Liverpool with pride in a job well done and only one regret, which was that he did not win the European Cup.

Shankly was awarded the OBE in November 1974, four months after he retired as Liverpool manager. On the morning of 26 September 1981, Bill Shankly was admitted to Broadgreen Hospital following a heart attack. His condition appeared to be stable and there was no suggestion that his life was in danger. On the following Monday morning, his condition suddenly deteriorated and he was transferred into intensive care. At 00:30 on 29 September, he suffered another cardiac arrest and was certified dead, twenty-seven days after his 68th birthday.

Liverpool erected the 15-foot high cast-iron Shankly Gates in front of the Anfield Road stand. Inscribed “You’ll Never Walk Alone”, they were opened by Nessie Shankly at a low-key ceremony in August 1982. In 1997, a seven-foot tall bronze statue of Shankly was unveiled outside the stadium. It bears the legend: “He made the people happy”. In 2016, a plinth to Shankly was installed on 96 Avenue outside Anfield. The inscription features details of Liverpool’s 1965 win over Inter Milan at Anfield, the club’s first great European night. 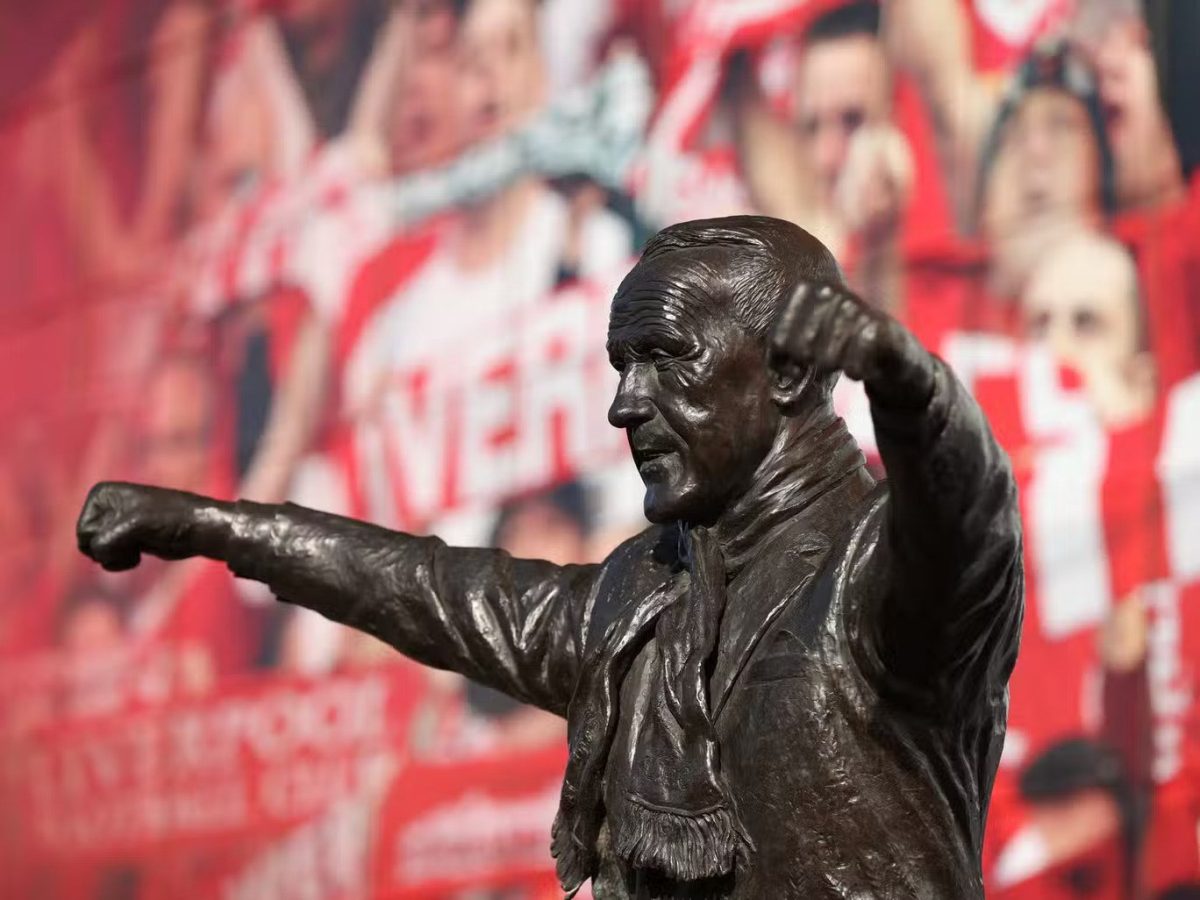 From the mid-1990s, Preston North End started a complete re-building of Deepdale to convert it into a modern all-seater stadium. When the former Spion Kop end was replaced by a new stand in 1998, it was named the Bill Shankly Kop and was designed with different coloured seats providing an image of Shankly’s head and shoulders.

Furthmore, Shankly was made an inaugural inductee of the English Football Hall of Fame in 2002, in recognition of his impact on the English game as a manager.

The pre-season friendly was played at The Showgrounds on May 6, 1948.

Preston, who were then managed by Isaac McDowell, would run out 3-0 victors through goals from Wilson (2) and McIntosh.

A ‘gate’ of £193 was lifted at the match with Preston North End, with the contest being Shankly’s final game as a footballer.

*Many thanks to Hunter McClelland for his research*